Although the Northeast, particularly New York State, was the epicenter of the Covid-19 outbreak in March and April,  states like New York, New Jersey and Massachusetts imposed stringent measures that limited personal interactions, such as closing all non-essential worksites, limiting gatherings to groups of 10 or less, and requiring people to wear masks in settings where they would be within six feet of others. 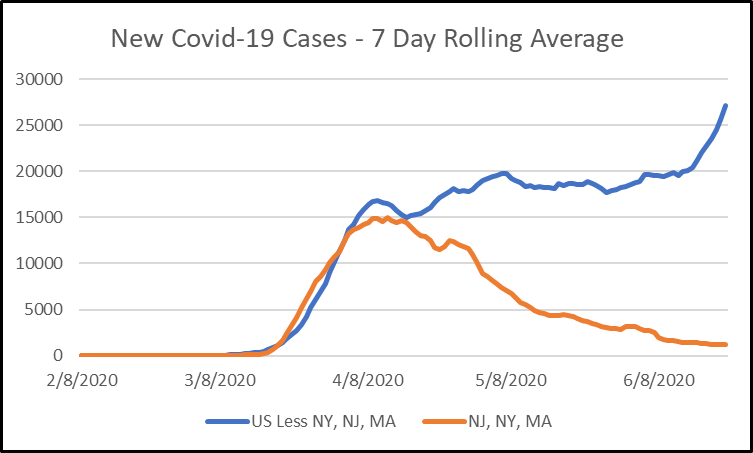 Because of the decreased personal interaction that resulted from state mandated social distancing, those states have seen steep declines in the number of new infections.  But infections in the rest of the nation, after plateauing in May and early June, are again increasing quickly, most likely because of increased social interaction starting around Memorial Day.

Some locations did not impose strict controls and have had recent increases in cases.  But, in other places where strict distancing measures were imposed, infections continue to rise despite best efforts, suggesting that the conventional narrative that weak policies are the only cause of the rise is an insufficient explanation for the recent increase.

The recent data is indeed alarming.  For example, Maricopa County Arizona (Phoenix) had 284 cases per hundred thousand residents in the past seven days.  At the beginning of June, the rate was less than 40.

There are rapid increases in Florida, particularly in Palm Beach, Miami, Orlando and Clearwater, in Texas, especially in Houston and Dallas, in South Carolina and in many other states in the South and West.

While the increase in cases partly reflects more testing, the percentage of tests that are positive is increasing in many places, showing a real increase in the spread of infection.  Deaths have not yet begun increasing, but are a lagging indicator which will not see increases that reflect case growth until as much as a month later.

Upstate Has Been Spared the Worst, So Far 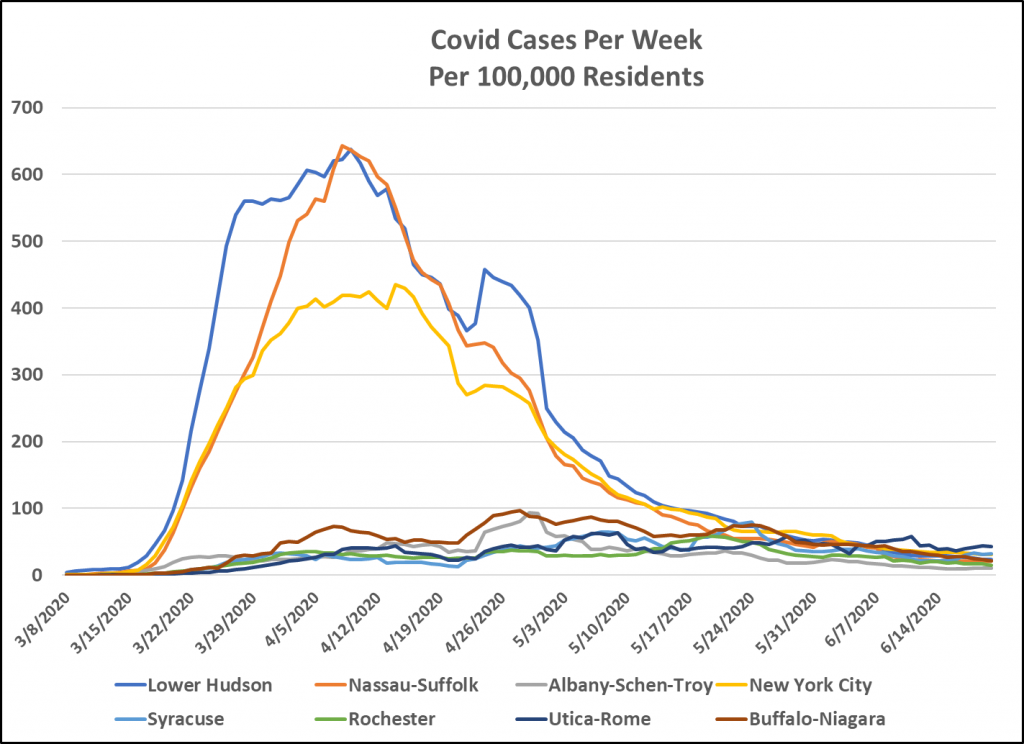 Viewed from the perspective of the number of cases in relation to population, the peak number of cases in upstate areas was far lower than in downstate areas.  The data shows that on a per resident basis, the peak of the outbreak was more severe in Nassau-Suffolk and Orange-Rockland-Westchester , with over 600 cases per 100,000 residents per week. That exceeded  New York City’s rate of more than 400.  In upstate New York, Buffalo-Niagara Falls peaked at 97 cases per hundred thousand, followed by Albany-Schenectady-Troy at 94.  Syracuse peaked at 79, Utica-Rome at 63 and Rochester at 59.

Current weekly infection rates in New York (as of June 20th) are low.  Downstate, New York City’s rate is 31 per hundred thousand.  Nassau-Suffolk’s rate is 21, while Orange-Rockland-Westchester’s is 23.  Upstate rates are similar.  Albany-Schenectady-Troy’s rate is 11, Utica-Rome’s is 43, Syracuse is 32, Rochester is 14 and Buffalo’s is 22.

Unlike many other states, New York has succeeded in substantially reducing the rate of Covid-19 infections and deaths.  But, the state’s continued success is tenuous and depends on the willingness of the public to continue to social distance, use masks and frequently wash hands.  State and local governmental leaders must reinforce safe behavior by example and through appropriate messaging, and by helping provide needed resources for testing and tracing. 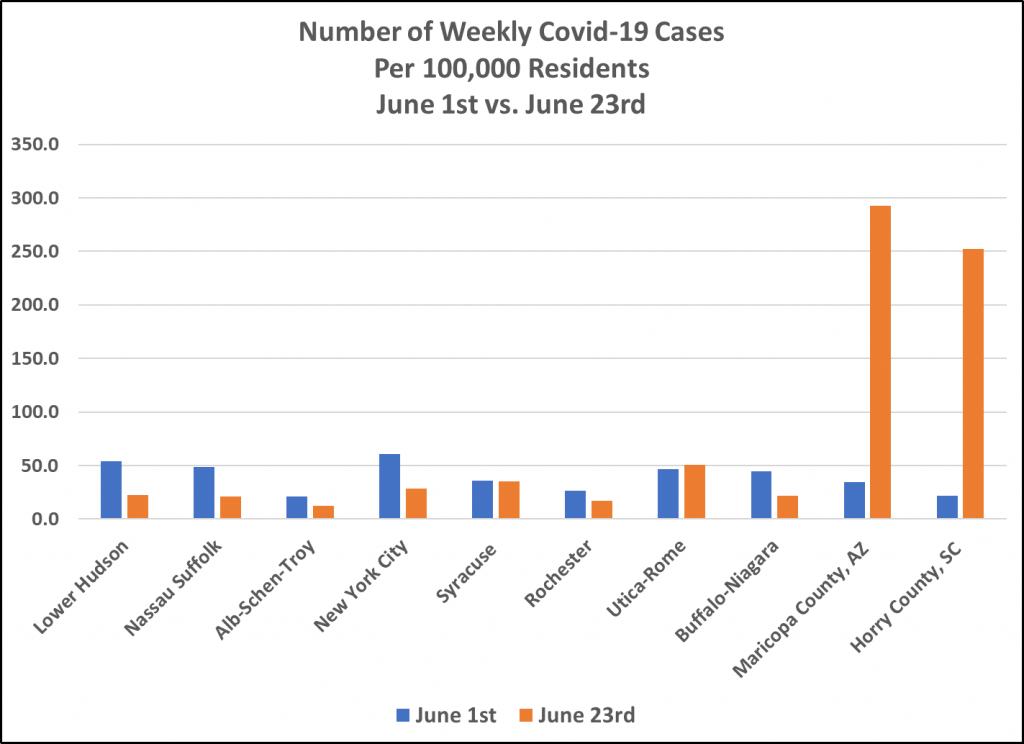 Although the rate of infection in New York State locations was stable or decreased between June 1st and 23rd, the rate grew by more than ten-fold in Maricopa County, Arizona, where Phoenix is located, and in Horry County, South Carolina, where Myrtle Beach is located.  The Phoenix area is at the beginning stages of a runaway of the epidemic.  The area had 284 cases per week per hundred thousand residents on June 23rd.  A week before that, the number in Maricopa County was 155.  Two weeks before, the county had 95.   Other places in Arizona are worse off. Yuma County has 700 cases per hundred thousand residents.  New York City at its peak had 430.

Horry County South Carolina (Myrtle Beach) went from 30 cases per week per hundred thousand residents at the beginning of June to more than 500 cases on the 23rd.  These examples are the tip of the iceberg. The news media has reported substantial infection growth in many southern and western states.  Many of these states removed social distancing controls more quickly than  New York has and are suddenly facing high infection rates. 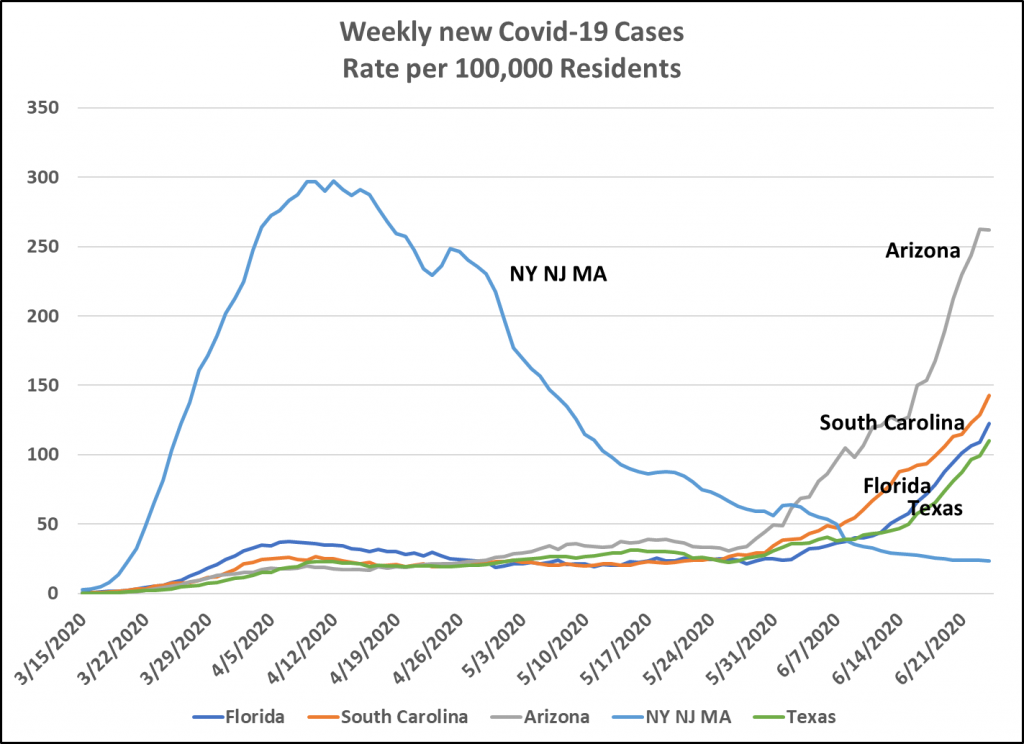 In Arizona, Florida, South Carolina and Texas, Covid-19 case rates were low throughout the period when the epidemic had its greatest impact in the Northeast. Rates, like those in upstate New York, did not reach high levels in April or May, in most cases remaining below 40 weekly cases per hundred thousand. In these states, the low infection rates may have led to the perception that Covid-19 risk was low. Governmental leaders did impose social distancing measures, including stay at home orders, but the orders had relatively short durations. Once restrictions began to be removed, in many cases they were lifted rapidly. None of these states have state level requirements that face masks be worn outside.

It’s worth noting that many of the areas that now have high rates of infection had an experience with Covid that was similar to that in Upstate New York – they never had high levels of infection, because social distancing measures were imposed in time to prevent the carnage that took place in the New York metropolitan area. That set of conditions may have led people to be overly complacent about the likelihood of infection.  Because relatively few people in many regions were infected, the problem seemed distant – not relevant to their lives, except as an annoyance because of the stay at home orders and the social distancing directions.  But, in June cases began to multiply in much of the country . 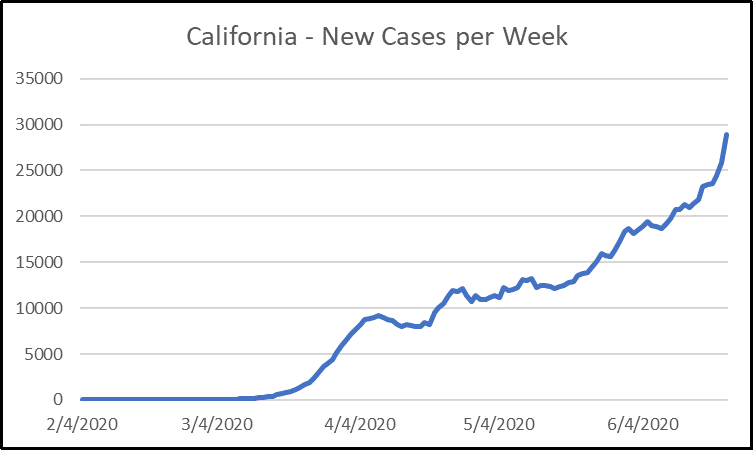 Another concerning part of what we are now seeing is that California, a state that once was described as a success story at containing Covid, is seeing a continuing rise in cases. In fact, California never got Covid under control.  While a portion of the increase is the result of infections in agricultural communities with large migrant labor populations living in close quarters, much of the increase in numbers is concentrated in Los Angeles County.  The virus is gaining ground even though California has had relatively strict measures in place intended to control the spread of virus.

There is no place that is not vulnerable to the kind of virus spread that is taking place in the South and Southwest if compliance with social distancing rules is low, particularly as controls are relaxed and people engage in more Summer activities.

The Federal Government’s approach to controlling Covid is at the heart of the problem.  President Trump has consistently offered messages that undercut Administration public health experts.  The Covid Task Force Briefing on Friday, June 26th was a good example of what is wrong.  Vice President Pence’s main efforts were to deflect responsibility for strategy development and communication to State and local leaders, even though Covid-19 outbreaks could take place anywhere in the country.  Pence was unwilling to recommend that people wear masks, even though wearing them is known to be the single most effective way of reducing transmission in settings where people closely interact. An effective national strategy is needed, not an effort to deflect responsibility from the Administration.