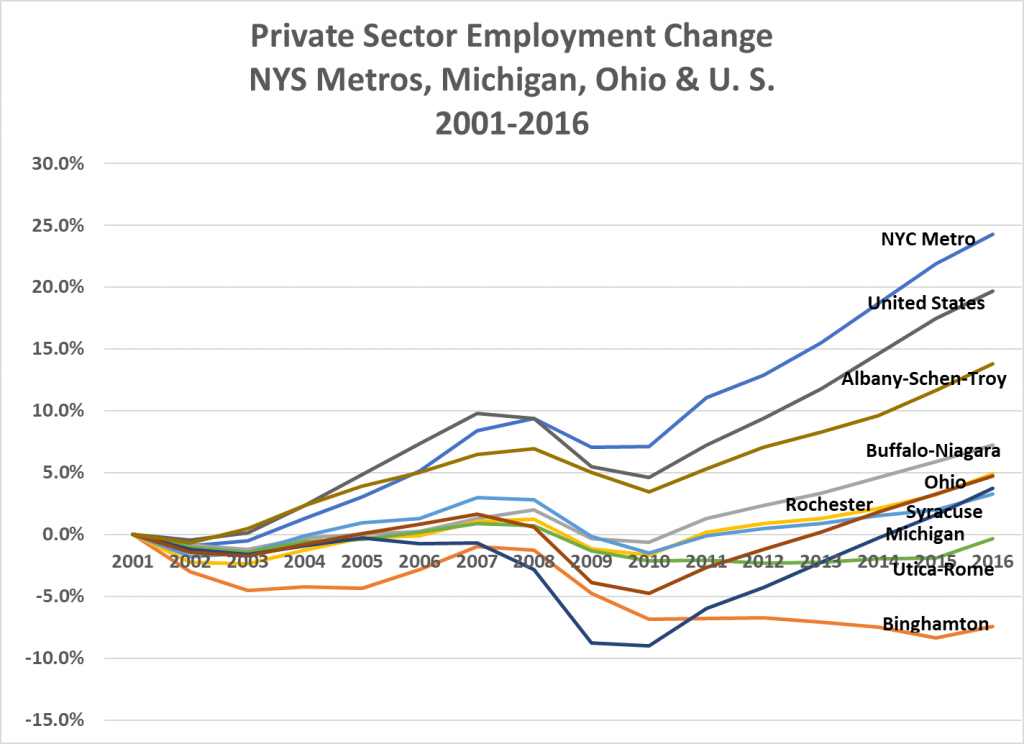 The weak performance of the region’s service sector is in part a reflection of the manufacturing employment losses, since much service sector employment has historically depended on manufacturing.  Almost all manufacturing firms are so-called “traded” businesses, since they sell products outside the regions where they are produced.  These businesses import income into regions through the sale of products and services that they export.  In contrast, local businesses sell products and services within regions.

Manufacturing industries typically produce products that are exported from the metropolitan areas where they are made.[1]  But, service providers operate in many cases within local markets.  For example, lawn care providers, hair dressers and barbers, restaurants and retail stores (other than those with an on-line presence) generally trade within a relatively small area.  Other service providers export their services.  Industries like financial services, information services, on-line retailers and institutions of higher education serve larger regional, national or international markets.

Because local services are bought in local, rather than regional or national markets, local service employment is proportional to local populations.  Because traded jobs export products and services and replace imports, they create more jobs within their regions.  Consequently, economic development strategies focus on strengthening existing traded industries, and attracting traded employment. 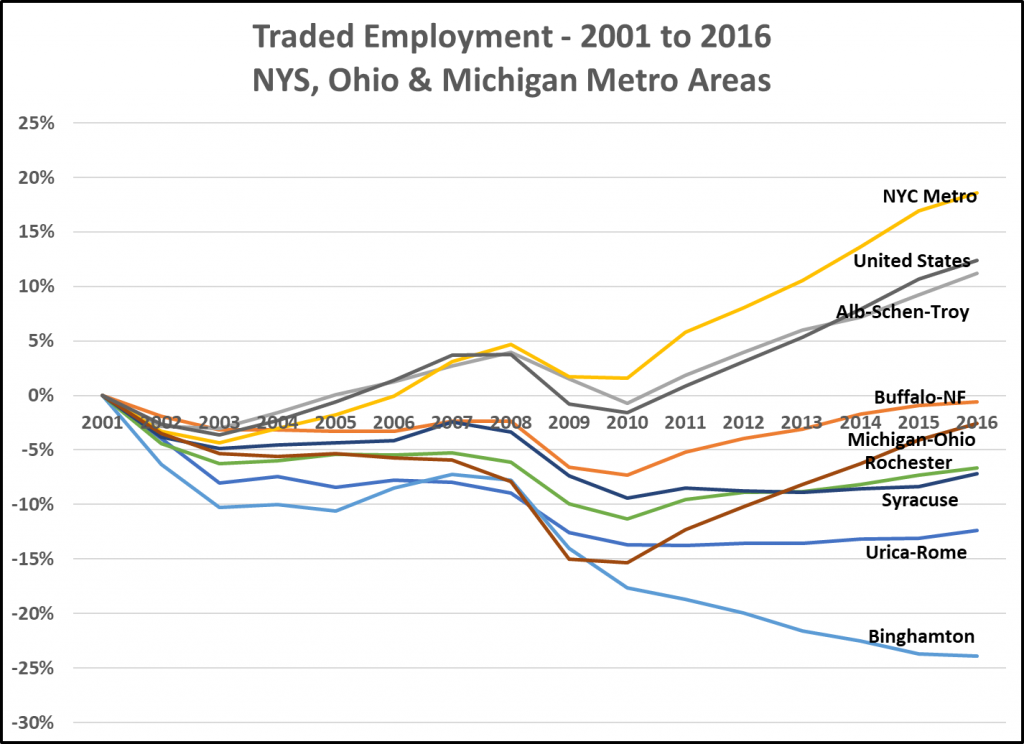 Metropolitan areas in Michigan and Ohio had greater employment losses between 2001 and 2010 than those in New York State, other than Binghamton.  Since 2010, Michigan and Ohio metros have recovered employment at nearly the rate of the nation growing 15% compared to 17%.

Between 2001 and 2010, 3,700,000 traded manufacturing jobs were lost in the United States – nearly three of every ten manufacturing jobs that existed in 2001.  Much of the lost manufacturing loss was the result of increased off-shore competition – 2.4 million jobs by one estimate.[3] But other factors were important as well.  Increases in productivity have played a significant role over the long-term in reducing manufacturing employment.  And, technological change has displaced major manufacturers, like Kodak, that depended on the sale of products like photographic film that became inferior to new competition.

Between 2010 and 2016, national traded service sector employment increased by 16.4% compared with 9.6% in the earlier period.  New York City’s traded service employment increased by 18.4%, while metropolitan areas in Michigan and Ohio had an increase of 14.2%.  All the metropolitan areas in upstate New York had increases of less than 10%, with Albany-Schenectady-Troy showing the strongest growth – 9.1%, followed by Rochester with 8.9% and Buffalo-Niagara Falls with 8%.  Binghamton again lost traded service sector employment . 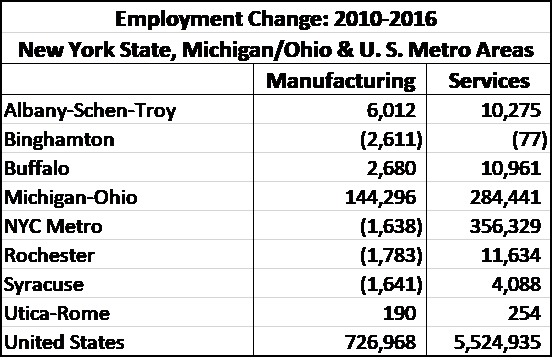 Following the great recession of 2008-2010, manufacturing employment rebounded nationally, as well as in several upstate New York metropolitan areas.  How much employment growth did traded manufacturing and service employment each contribute? 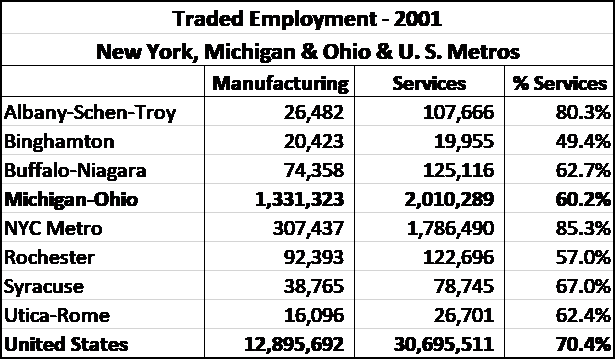 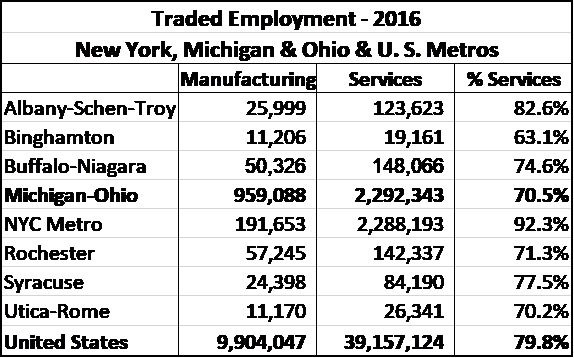 Only the Binghamton metropolitan area has less than 70% of traded employment in service industries, and even that area has shifted towards services.

State and local governments in the rust-belt seeking to strengthen regional economies face a challenging environment.  Because they have higher percentages of employment in declining and slow-growing industries than other regions, if rust-belt regions are to succeed in encouraging economic growth, they must focus on helping build employment in faster growing industries, while helping preserve the existing industrial base.   Because there are relatively few large business expansions and relocations in a given year (one estimate is 1,500)[4], attracting businesses in growing industries can be difficult – competition can be intense and incentive costs are often very high.  Supporting the growth of existing small businesses in faster growing sectors may be more cost-effective, but relatively few small businesses grow to become large employers.

Too often, policy makers think primarily of tax incentives as the primary tool to induce businesses to locate and expand within their jurisdictions.  But, tax incentives have crippling weaknesses as economic development policy tools.  First, they are extraordinarily wasteful.  Timothy J. Bartik, in “Who Benefits from Economic Development Incentives? How Incentive Effects on Local Incomes and the Income Distribution Vary with Different Assumptions about Incentive Policy and the Local Economy”[5] found that 85 to 90% of typical incentive spending is wasted, because it does not affect the existence of about 85 to 90% of the jobs that receive tax incentives. Bartik writes, ““But for” the typical incentives, the probability of the incented jobs choosing the state would have been reduced from 100 percent to 90 or 85 percent.” Because of this, Bartik concludes, “As a result, the direct budget costs of incentives significantly exceed fiscal benefits.”[6] Bartik estimates that fiscal benefits are 22% of incentive costs, based on his model’s assumptions.

In practical terms, the heavy use of tax incentives carries a large opportunity cost.  Given that state and local budgets are constrained by tax revenues, large tax incentive expenditures are likely to result in cuts to major state programs – primarily education and social assistance.  Alternatively, they can lead to tax increases, which decrease private sector demand because they reduce the number of dollars available to taxpayers to spend.

Development of successful economic development strategies at the state level requires understanding the needs of existing businesses within a region and the development of effective assistance strategies.  They require the creation and maintenance of strong relationships between state, local and regional economic development organizations.  They build knowledge of and relationships with existing traded businesses and seek to meet their needs.  Effective organizations maintain strong business visitation programs, assemble up to date site data, and work with private developers to expand site availability, work with training providers to ensure the availability of workers with needed skills, assist expanding businesses in expediting permit processes, and where needed, provide financial assistance for capital costs and worker training.

Because of the difficulties faced by upstate metropolitan areas west of Albany-Schenectady-Troy, Governor Cuomo has focused resources on the region. The Governor proposed legislation in 2011 creating Regional Economic Development Councils. The Councils are responsible for the creation and implementation of regional economic development plans.  The state provided funding to support their implementation.

The intent of the initiative is to give regions greater voice in decision making about state supported economic development efforts.  As of 2018, the state has spent $5.4 billion on projects selected through the Regional Councils.[7]  This year’s funding is $750,000,000.  $225 million is to be provided through grants and tax credits from Empire State Development, and $525 million through other state agency programs.  To be sure, much of the spending is through already existing programs, but there has been significant additional funding provided for regional initiatives.

[1] One of the relatively rare exceptions might be found in the food processing industry, such as a few dairies that only sell their products within the metropolitan areas where they are located.

[2]Source:  Bureau of Labor Statistics – Current Employment Survey.  Traded employment estimated as proposed by Mercedes Delgado, Richard Bryden and Samantha Zyontz, in “Categorization of Traded and Local Industries in the US Economy,”   http://clustermapping.us/sites/default/files/files/page/Categorization%20of%20Traded%20and%20Local%20Industries%20in%20the%20US%20Economy.pdf.  In this paper the authors estimate the percentage of employment in two-digit NAICS codes that is traded.  Because two digit codes are broad categories, differences in industry mix within clusters between areas are possible sources of estimation error.