In a recent post I looked at employment changes in New York’s metropolitan areas and compared their performance with other metropolitan areas in the rust belt.  I found that change was inconsistent between cities in each state, and over different time periods.  I argued that industry mix probably was the primary cause of the differing results.

The loss of manufacturing jobs created a significant drag on job growth in the rust belt, and explains much of the growth of income inequality in the United States since the middle part of the last century.  Manufacturing jobs provided working class people with relatively high incomes.  Today, the opportunities that manufacturing provided to people with high school educations have sharply declined. 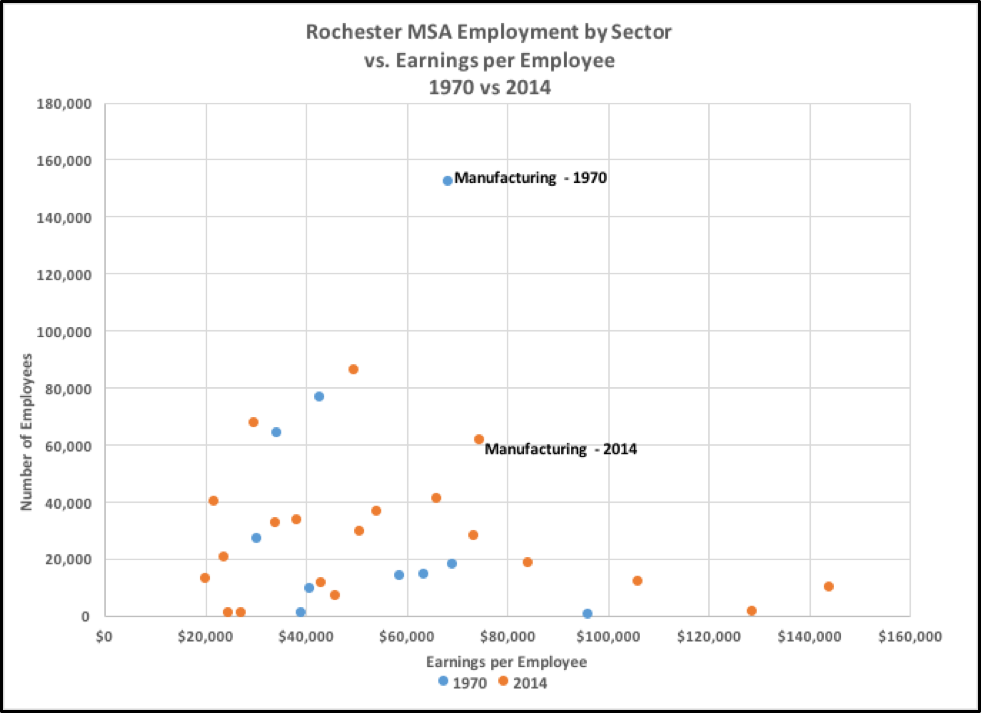 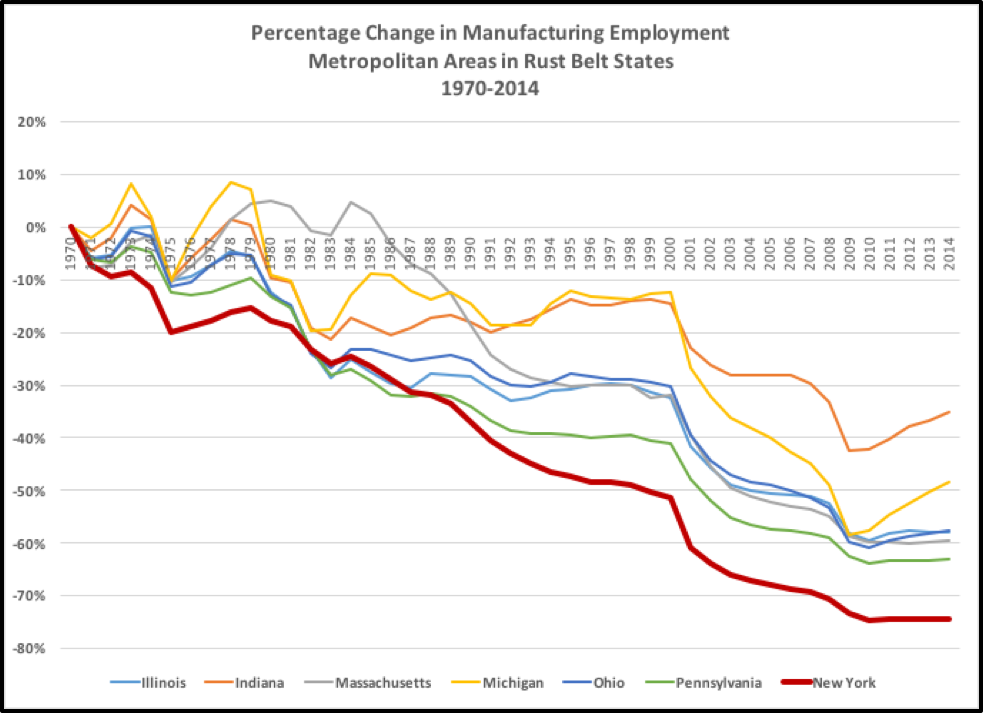 In this section, aggregate data for all metropolitan areas each rust belt state is examined.[1]  The data shows that while overall employment change in metropolitan areas was inconsistent over time, that between 1970 and 2014, manufacturing showed a larger decline in New York State than in metropolitan areas in other rust belt states.  New York metropolitan areas have lost 75% of the manufacturing jobs that existed in 1970.  Other rust belt states lost between 35% and 63%.  (Note that in the data, there is a discontinuity between the years 2000 and 2001, reflecting the change from the Standard Industrial Code Classification System and the North American Industry Classification System, which removed some industries from the manufacturing sector. As a result, the long-term data charts and tables exaggerate the change that took place between 2000 and 2001.  For that reason, shorter term charts and tables exclude the 2000-2001 data).

(In the chart above, blue shaded cells performed better than the median for metropolitan areas) 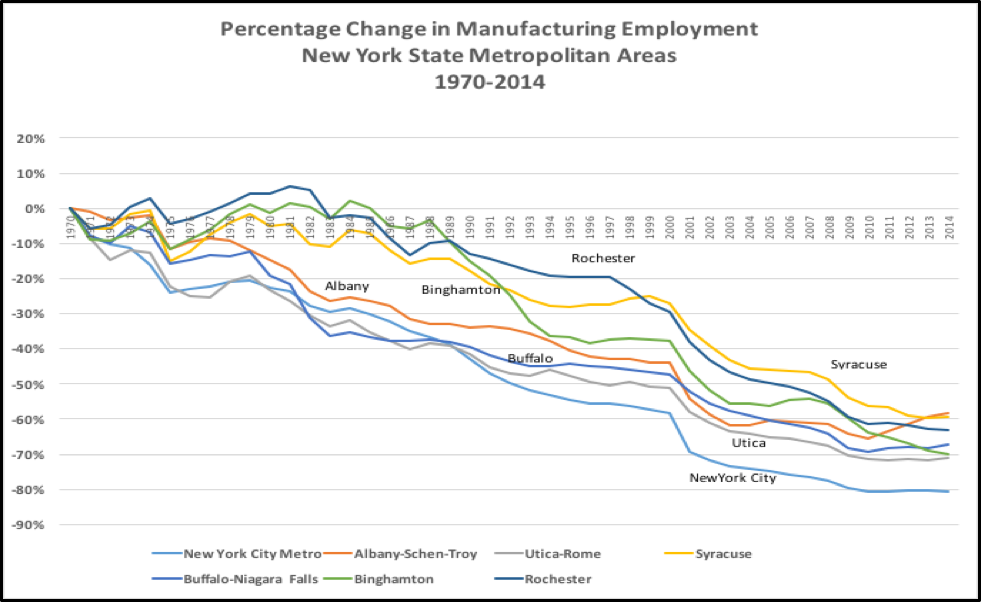 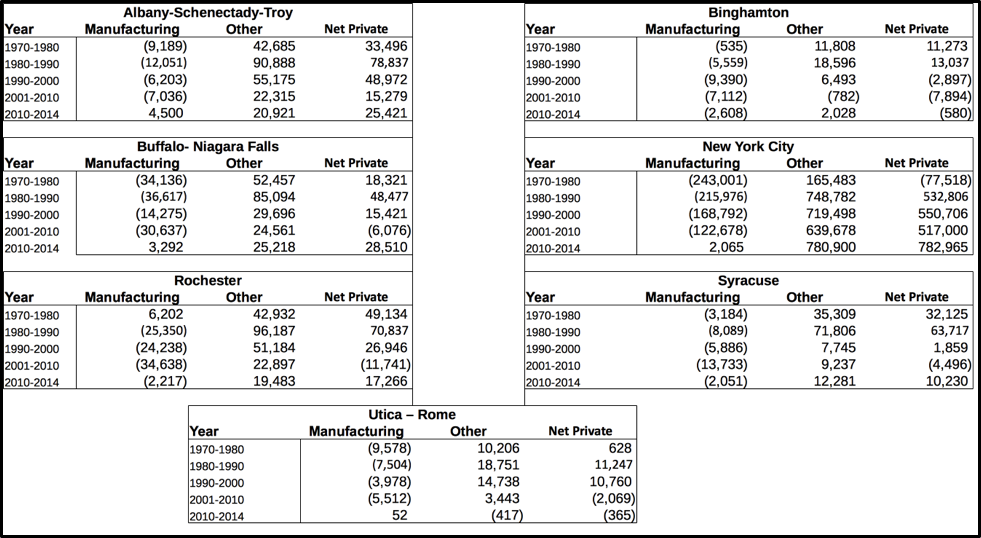 Since 2001, two New York metropolitan areas have shown significant private sector employment growth – New York City and Albany-Schenectady-Troy.  Buffalo, Rochester and Syracuse did not do well between 2001 and 2010, but showed significant recoveries from 2010 to 2014.  Binghamton and Utica-Rome had employment losses in the 2001 to 2014 period. 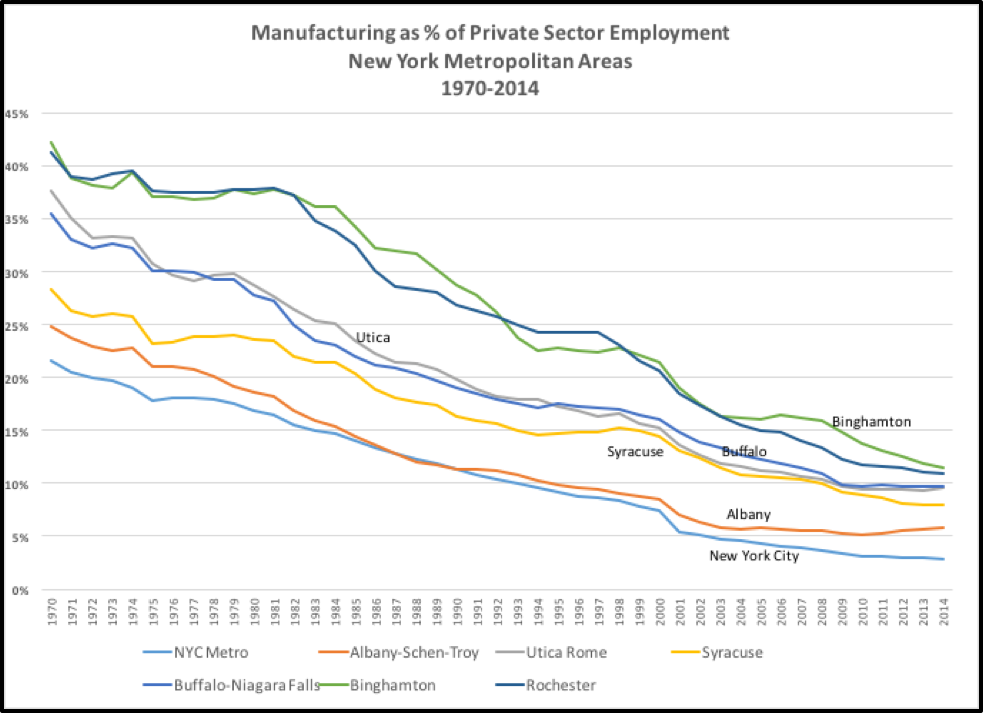 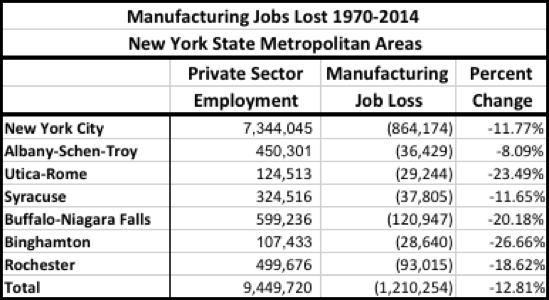 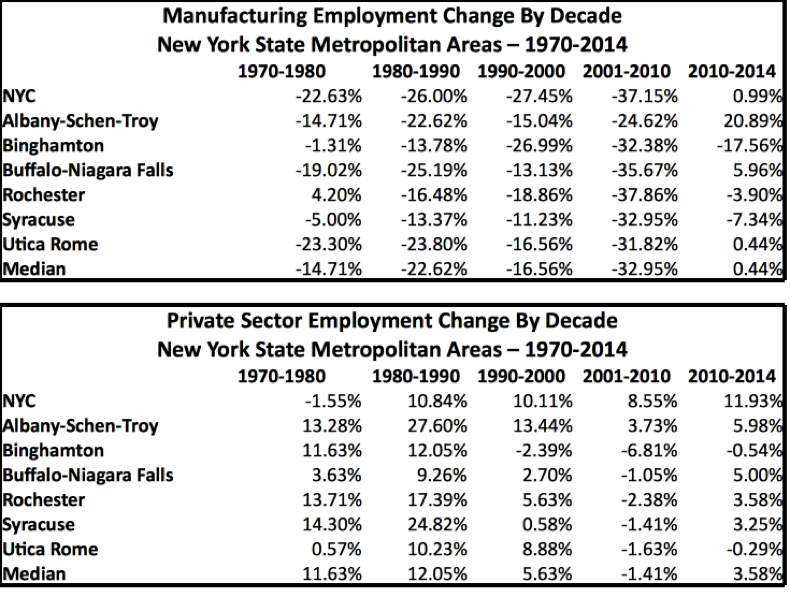 Decreases in Concentration of Employment in Manufacturing Industries 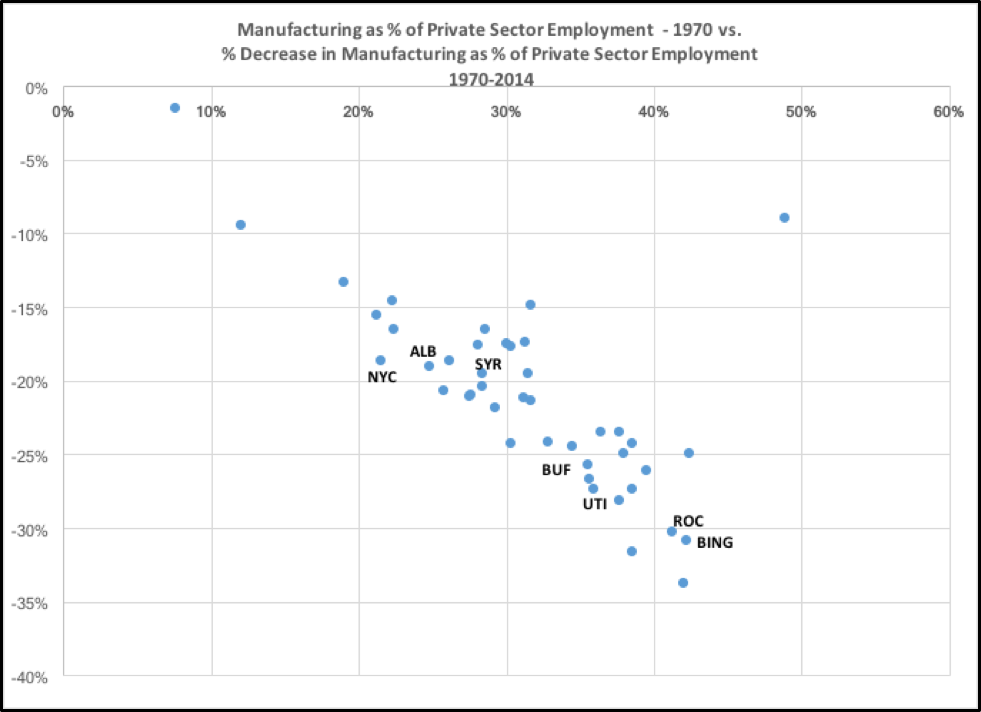 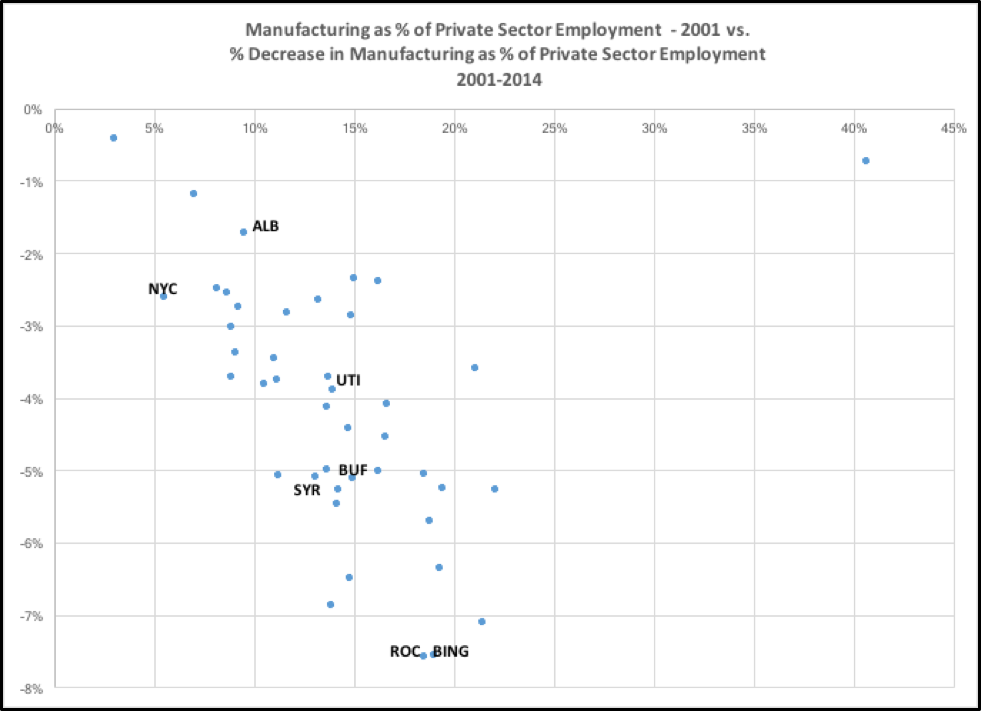 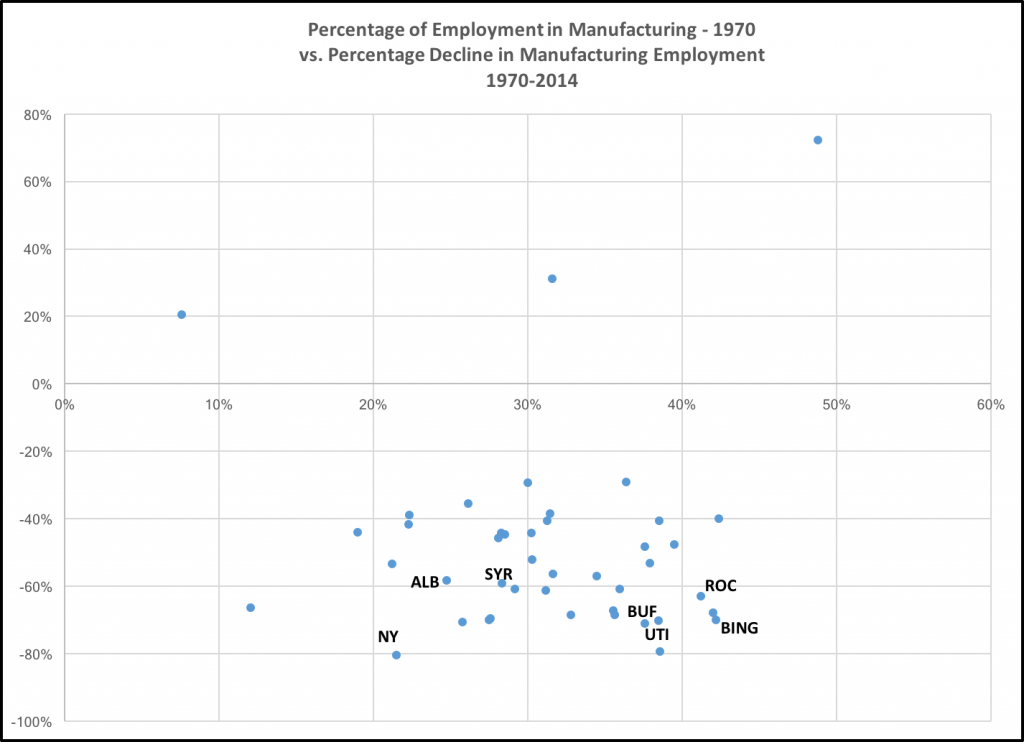 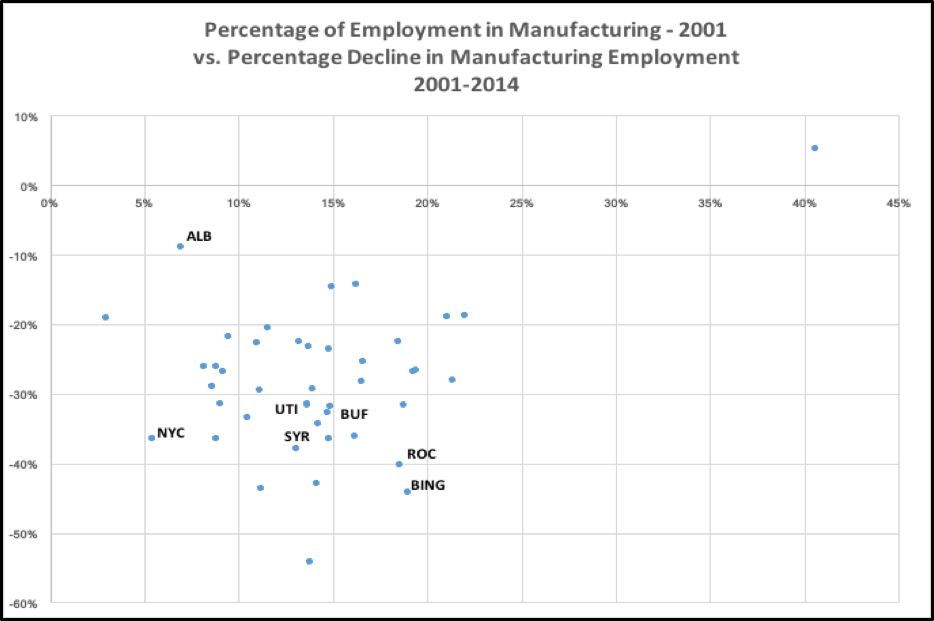 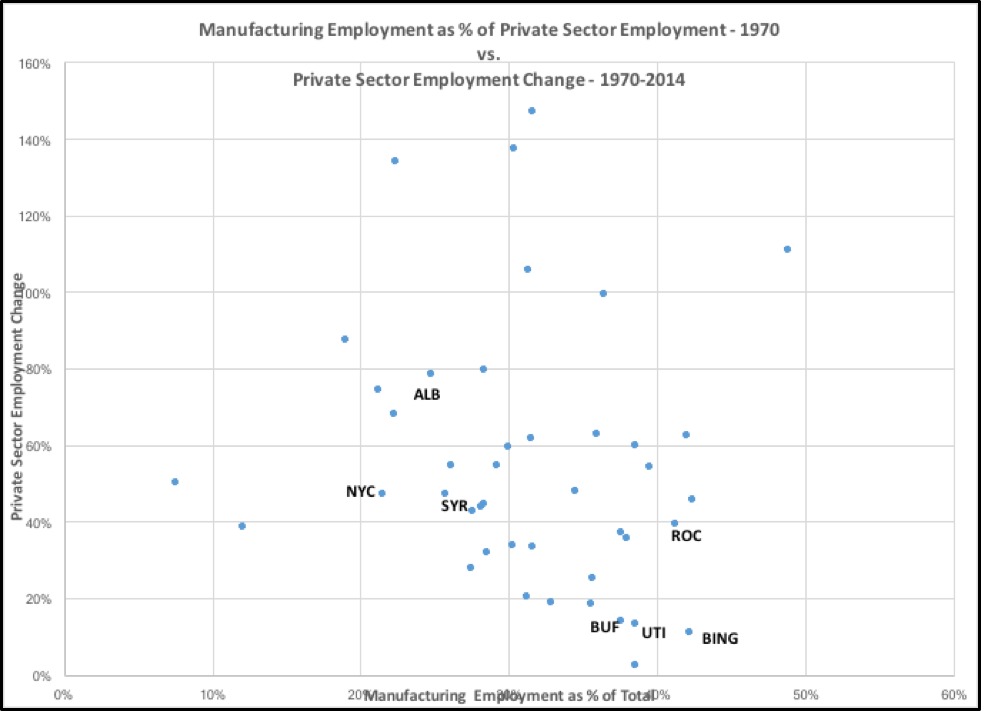 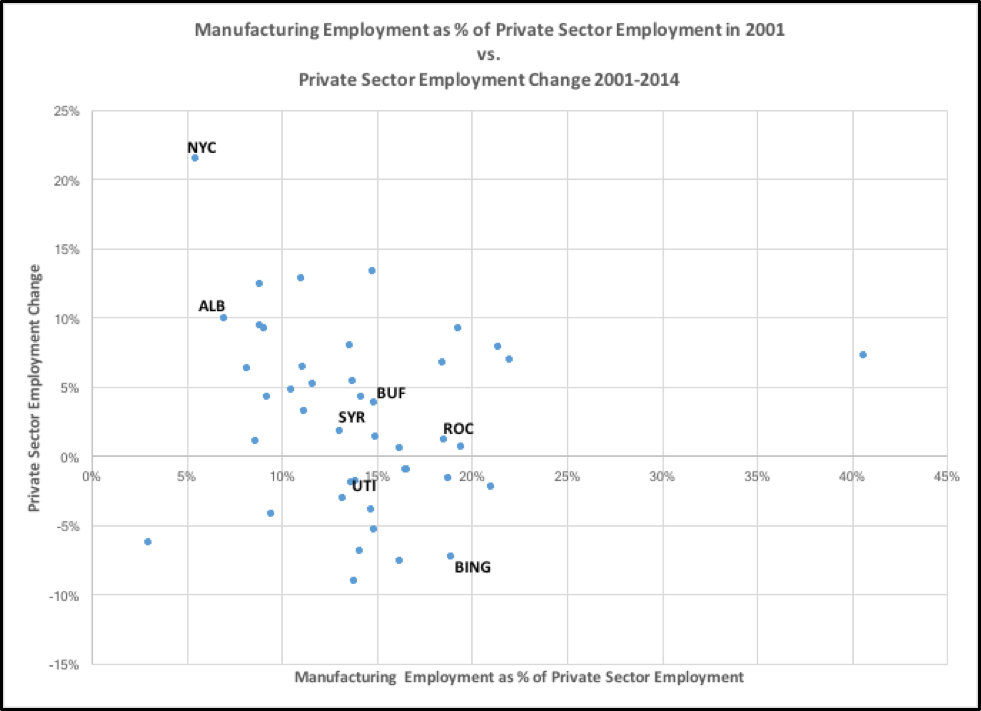 This data shows that much of New York’s relatively large manufacturing employment loss resulted from the fact that a number of upstate cities had higher concentrations of manufacturing than average for the rust belt.  In New York, unlike metropolitan areas elsewhere in the rust belt, private sector employment growth appeared to be negatively related to the level of employment in the manufacturing sector.

All of the metropolitan areas in the rust belt were hurt by technological change, factory automation and the movement of manufacturing off-shore.  These trends reflect the continuing attempt of manufacturers to cut costs to be competitive.  In addition, the New York and the rust belt are no longer as good location to serve markets as they were when manufacturers in the United States primarily served domestic markets.  For those manufacturers that find it advantageous to serve domestic markets from the United States, the center of population has continued to move South and West.

Manufacturing employment losses in New York State had differing causes.  In Rochester, Kodak was initially threatened from foreign competition by Fuji, then saw its cash cow (film production) killed by the introduction of digital cameras.  In Syracuse, New Process Gear was closed by Fiat/Chrysler because of high labor costs.  Production continued at factories in Indiana and Tennessee, locations with lower labor costs and better geographic locations.  Carrier moved production of air conditioners from Syracuse to Tennessee, Texas, and Indiana (now being transferred to Mexico) for the same reasons.

Given transportation costs, the need for quick delivery of some products, and in a few cases technological leadership, some manufacturing continues in the United States.  In the competition to retain manufacturing, New York may continue to be handicapped by its location in the Northeast, its relatively high labor costs, and congestion in the New York metropolitan areas.

Future losses of manufacturing jobs have a smaller potential to harm regional economies because manufacturing employment is now only a small portion of private sector employment in the rust belt and New York State.  But, the loss of millions of relatively high paying jobs in manufacturing industries has had significant negative consequences for New York and rust belt metropolitan areas.

In New York, the decline of manufacturing has been a cause of private sector employment declines in places like Binghamton and Utica-Rome, and slow growth in Rochester, Syracuse and Buffalo-Niagara Falls.  And, though employee earnings are not the primary subject of this post, data from Rochester showed that the loss of 93,000 manufacturing jobs contributed to the stagnation in average private sector earnings in that metropolitan area, as well as greater earnings inequality.

In future posts I will examine employment change in service industries, and implications for metropolitan area wages.

[2] Periods were broken between 2000 and 2001 because of the change from the SIC to NAICS classification system, which creates a discontinuity because of changes in firms classified as manufacturers.