Kent Gardner argues forcefully in the Rochester Beacon that Rochester’s school system is broken and in need of radical change. Gardner’s post highlights the efforts of a local organization, ROC the Future, to bring about reform of the city’s school system. Gardner is correct – students in the city’s schools do poorly compared to others in the state, and the state designated Distinguished Educator Jaime Aquino’s recent report shows a series of failures of leadership, communication and implementation in the school district.   Here I take a close look at the dimensions of student performance in Rochester compared with other districts in Monroe County and the state outside New York City and look at what my findings suggest for possible reforms.

The Effect of Economic Disadvantage on Performance

Economic disadvantage is the strongest predictor of student performance among the socio-economic variables available for review in the data available from the state test database. The percentage of economically disadvantaged students in school districts is associated with 70% of the differences in performance on the 2018 Grade 8 New York State English Language Arts exam among school districts outside New York City. 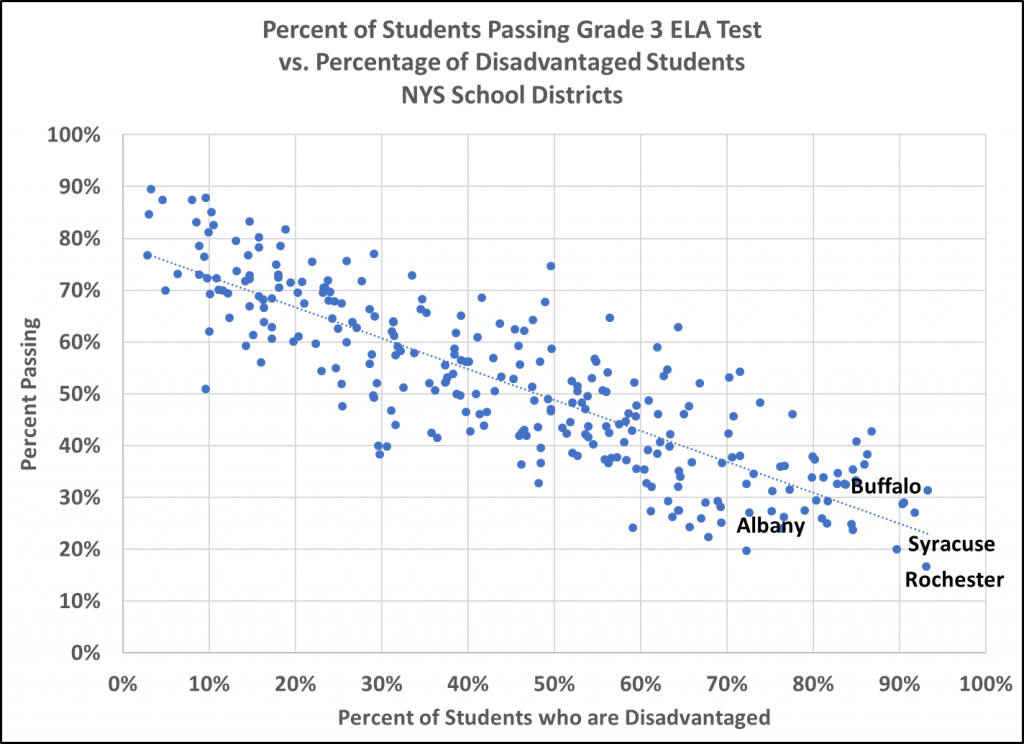 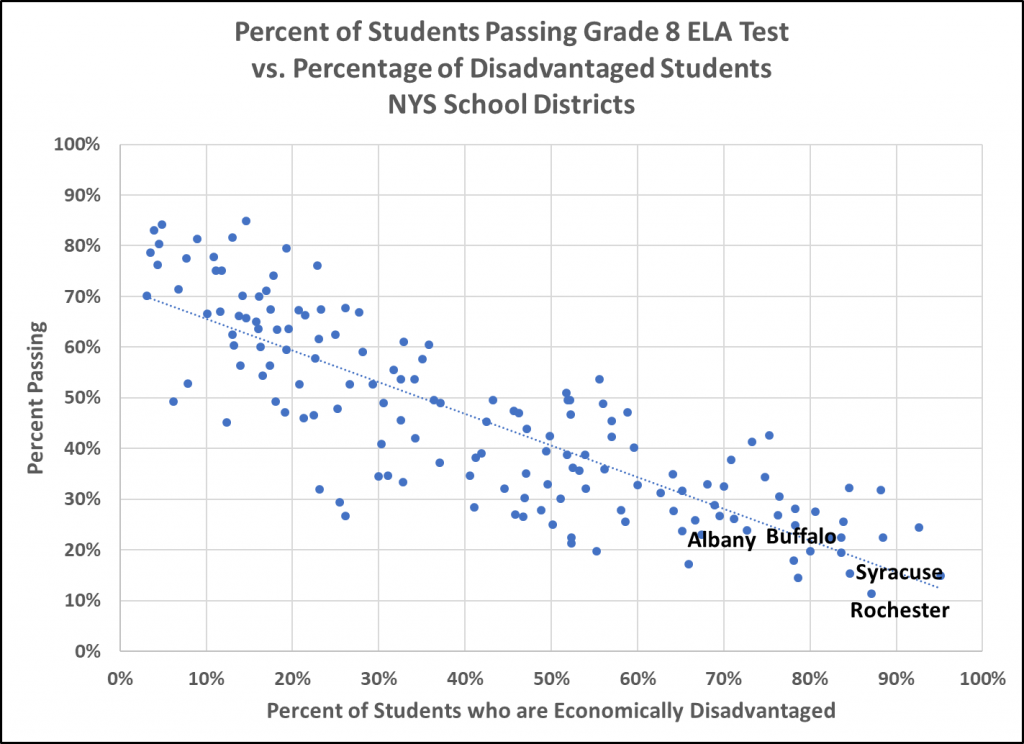 Eighty-seven percent of eighth grade Rochester School District students were economically disadvantaged in 2018, among the highest percentage in the state, and only 11.4% of 8th graders received a passing grade on the test – the lowest among the school districts studied. For districts in Monroe County outside the City of Rochester, an average of 37% of students were economically disadvantaged, and 50% passed the eighth grade ELA exam, receiving a grade of 3 or 4.

Other upstate cities also had relatively high percentages of disadvantaged students and small percentages of students passing the state exam, but Rochester’s case was the most extreme.

Five of the nine upstate cities in the chart above had a lower 8th grade passing rate than would be expected based on the relationship between student performance and economic disadvantage.  But, even if the schools in these cities had performed as well as expected based on the model, student performance would still have been poor.  In the case of Rochester, 17% of eighth graders would have passed and not 11%.  For Syracuse, 19% would have passed, not 15%.

The strong association between economic disadvantage and poor student performance found in Rochester and other upstate cities reflects other studies that find that student achievement at the school district level is strongly related to family income. For example, a group of Stanford University researchers in a study reported on by the New York Times in “Money, Race and Success: How Your School District Compares” found that sixth grade students in the richest districts are four grade levels ahead of those in the poorest districts.

The performance of schools within school districts varied, but the overall relationship between economic disadvantage and student performance continued to be strong. In this case, test results from grades 3 and 4  were combined, as were results from grades seven and eight, because small numbers of students attend typical elementary schools. By combining grades, random sampling variation is decreased. 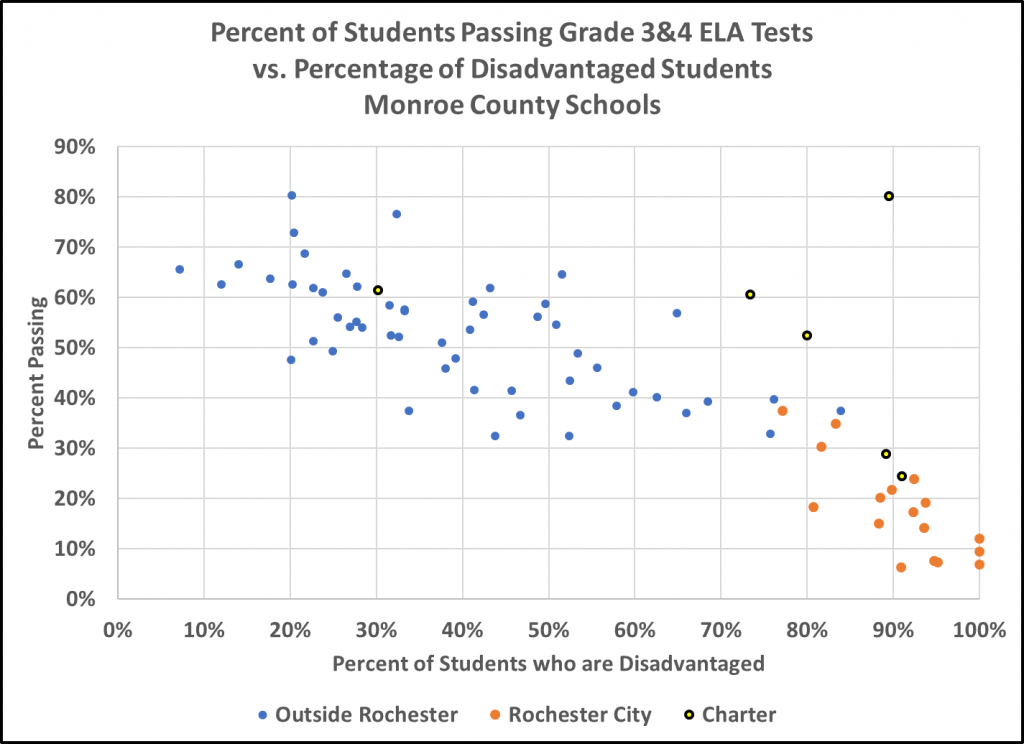 Rochester School District third and fourth grade students were both less likely to pass the ELA exam than students in other Monroe County school districts, and more likely to be economically disadvantaged.  The data for grade three and four shows that overall, more than 70% of students at all Rochester City schools were disadvantaged. At three schools, all of the tested students were disadvantaged. The performance of third and fourth grade Rochester School District students varied, ranging from six percent passing at one elementary school to 37.5% at another.

Smaller percentages of eighth grade students in Rochester schools passed the 8th grade ELA exam than in other Monroe County school districts.  Between 0% and 24% of students passed the state’s ELA exam. At the same time, concentrations of economically disadvantaged students in Rochester were much higher than in other Monroe County school districts.  73% to 94% of eighth grade Rochester City School students were economically disadvantaged. Performance at five of the ten schools in the group was in the bottom 20% of schools based on the relationship between performance and economic disadvantage. Performance at the other five schools was near average.

Rochester’s school system is at a crossroads. Student performance in Rochester schools is poor, even accounting for effect of the high percentage of students who are disadvantaged. The recent report by distinguished educator Jaime Aquino documents shortcomings in leadership, communications and policy execution. These factors all call for substantial changes in current practice.

The pervasiveness of the relationship between economic insecurity and poor student performance points to the need reduce the concentration of poverty in the City of Rochester. As a city, Rochester is highly dependent on other levels of government – primarily the Federal government — for assistance in combatting poverty. The city/county anti-poverty initiative – RMAPI operates with involved entities on strategy development and coordination. It is important that RMAPI and its partners develop clear strategies implemented at a scale that is large enough to have meaningful impacts. Rochester’s Center for Governmental Research developed a series of options for policy initiatives for RMAPI in 2014, some of which the organization followed.

The most recent progress report posted on the RMAPI website describes its 2017 accomplishments. The most recent press release is dated January 2018. Although the organization made some programmatic initiatives in the 2015-2017 time-frame, its website lacks information on the current status of its efforts.

There are potential federal actions that could benefit low income families. Because poor families cannot invest in their children as much as wealthier parents, solutions like proposed refundable family tax credits could help the already existing Earned Income Tax Credit reduce income insecurity. Increasing food stamp benefits, particularly for families with children might be another approach. Because there is evidence that disadvantaged students perform better in schools that have lower concentrations of disadvantaged students, efforts to provide lower income families with access to housing in wealthier neighborhoods has been proposed as a remedy.

In part, the organizational failures in the Rochester City School District may reflect the difficult conditions within which they operate. But, students at city schools do not perform well, even considering the concentration of economically insecure students who attend them. Given the lasting consequences of student failure, community expectations demand better. The Distinguished Educator’s report demonstrates that the district must make a sharp course correction if it hopes to meet the needs of Rochester families.

At the same time, as long as the concentration of poverty in Rochester continues to be very high, efforts to substantially improve student performance at city schools are likely to be only marginally successful.  The performance of students in Rochester City school reflects the nexus of income inequality and organizational failures. Ameliorating the problem will require a multi-pronged approach that addresses both problems.