Recently, in an interview with the Wall Street Journal, President Trump suggested that upstate New York residents should leave the state for Wisconsin, where a new Foxconn LCD display panel manufacturing plant will be located, creating at least 3,000 jobs.  President Trump said, “I said, you know, Gary, you go to certain sections and you’re going to need people to work in these massive plants that we’re getting, that are moving in. Where do we have the people? You know where we have the people? In New York state that can’t get jobs, in many other places that can’t get jobs. And people are going to have to start moving. They’re going to move to Colorado and they’re going to move to Iowa and Wisconsin and places where – like if Foxconn goes to Wisconsin, which is one of the places they’re very strongly considering – but if Foxconn goes to Wisconsin and they have a very low rate and the governor’s done an excellent job, you’re going to have a situation where you got to get the people. But they’re going to start moving. And I’m going to start explaining to people when you have an area that just isn’t working – like upper New York state, where people are getting very badly hurt – and then you’ll have another area 500 miles away where you can’t – you can’t get people, I’m going to explain you can leave, it’s OK, don’t worry about your house.” Source, “Full transcript: Trump’s Wall Street Journal interview” Politico, August 1, 2017. 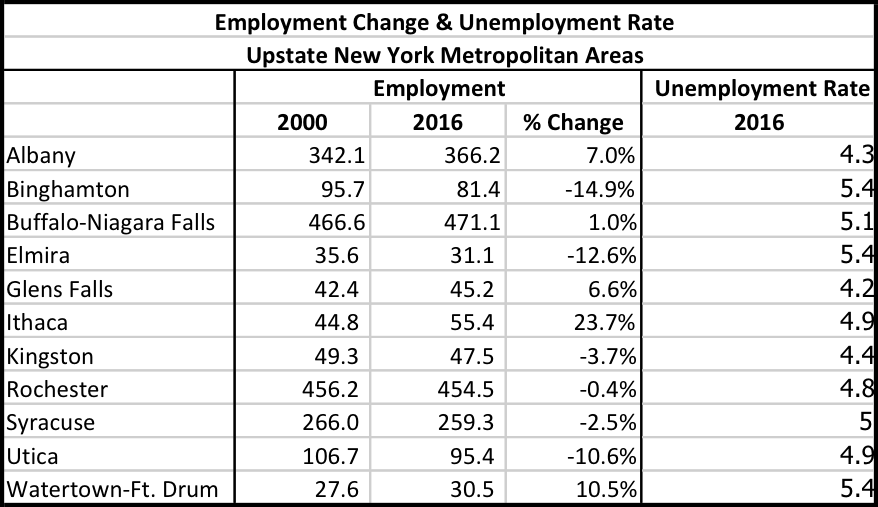 It is true that upstate employment performance has been weak, with most upstate metropolitan areas seeing decreases, while a few, like Buffalo, Glens Falls and Albany-Schenectady-Troy had small increases (Source – Bureau of Labor Statistics – Local Area Statistics). Many of the region’s smaller metropolitan areas had relatively large losses:  Binghamton, Elmira and Utica-Rome each lost more than 10% of its population. 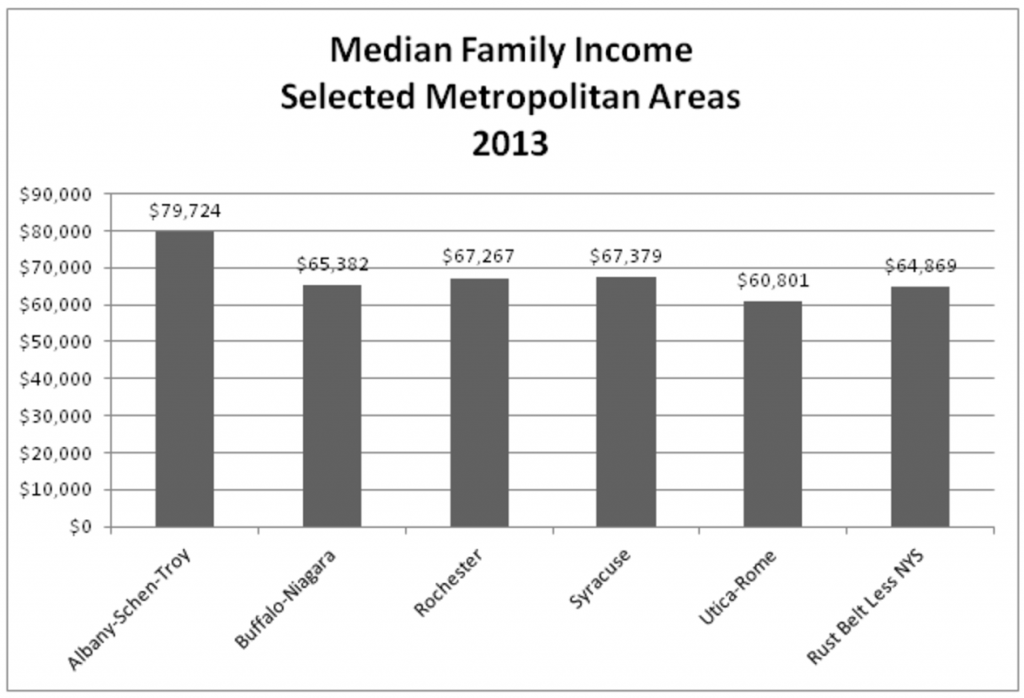 On the other hand,   Median household incomes upstate were near the average for rust belt states, and the unemployment rate for upstate counties was the same as the national average in 2016: 4.9% in 2016 (Source: U. S. Department of Labor, Bureau of Labor Statistics, Local Area Unemployment Statistics).

The fact that the average unemployment rate in upstate counties is near the national average shows that the President’s statement, “You know where we have the people? In New York state that can’t get jobs…when you have an area that just isn’t working – like upper New York state, where people are getting very badly hurt,” is unfounded, given that unemployment upstate is no higher than the national average and that median household incomes are near it.  The labor force in upstate New York is stagnant or shrinking in most cases, but few labor force members are unemployed.  Upstate’s problem is not that its residents cannot find jobs, it is that the region’s population and workforce are stagnant or shrinking.

E. J. McMahon, in a recent New York Post op. ed., “Trump’s right, Cuomo wrong about the woes of Upstate” pointed out that many upstate New York counties are losing population.  McMahon argues, “From mid-2010 to mid-2016, nearly 194,000 people moved out of the 50 counties north of the New York City metro region — a net out-migration rate exceeded only by four states. Births and foreign immigrants made up some of the difference, but the total upstate population still dropped by nearly 60,000 people.”  McMahon’s statement is correct – many areas upstate have lost population since 2010 – in fact, 40 of 62 counties in New York State lost population between 2010 and 2016.

New York State is not unique in seeing population declines in some areas.  In Wisconsin, one of the places that the President said “they’re going to move to,” 36 of 70 counties saw population declines between 2010 and 2015.  In Ohio, included for comparison as another rust belt state which claims to have more business friendly policies than New York State, county populations decreased in 62 of 90 counties.

(Table with full listing of counties is here:) 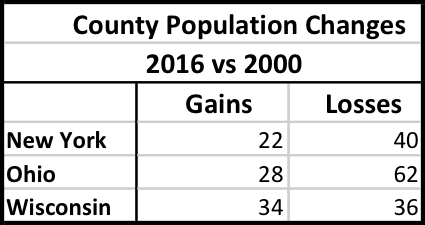 E. J. McMahon argues in his New York Post piece that, “Trump, in effect, was simply prodding upstaters to act in their own best economic interests. …So, taxes aside, what advantages does Wisconsin offer over New York?….While Wisconsin Gov. Scott Walker has been an aggressive deregulator, New York’s regulatory climate in general is notoriously hostile to businesses. The 1970s-era State Environmental Quality Review Act, which has no equivalent in most states, hands a potent weapon to anti-development activists.”

Looking at New York, Wisconsin and Ohio from 2000 to 2015,  there is no evidence of consistent differences in performance that would reflect the effect of “business friendly” policies on job growth.  Instead, it shows that population and job growth vary substantially from local labor market to local labor market within New York State, and in Wisconsin and Ohio.  In each state, some areas are suffering, while others are doing relatively well.  New York had by far the strongest job growth overall between 2000 and 2015, but employment growth in New  York’s rural areas was the weakest of the three states.  Wisconsin’s performance was in the middle in both metropolitan areas and non-metropolitan areas, and Ohio’s was weakest in metropolitan areas, but stronger than New York’s in rural areas.

In a recent post, “Government Policies and Job Growth in the Rust Belt,” I showed that the relative performance of metropolitan areas over the rust belt differed substantially across time periods between 1990 and 2015.  If government policies, like “business friendliness” determined the economic performance of regions we would expect to see consistent advantages for states with states with business friendly attributes like low taxes or lax environmental regulation.  But, we do not.

Large manufacturing attraction projects, like the Foxconn plant in Wisconsin, the Solar City project in Buffalo,  and Global Foundries near Saratoga Springs cannot, in themselves be successful approaches to significantly improving the employment rate at the state level.

To encourage Foxconn to locate its facility in Wisconsin with a promise to create 3,000 jobs, the state agreed to provide three billion dollars in tax incentives and to waive environmental regulations  to “allow Foxconn, without permits, to discharge dredged materials, fill wetlands, change the course of streams, build artificial bodies of water that connect with natural waterways and build on a riverbed or lakebed.Foxconn would also be exempt from having to create a state environmental impact statement, something required for much smaller projects.” Source: The Washington Post, “The Latest: Wisconsin Foxconn deal waives regulations,” July 28, 2017.

Projects that involve expenditures of as much as one million dollars per job are simply too expensive to replicate on a scale that would be large enough to meaningfully change  a regional economy.  New York’s employment was about 9,100,000 in 2016.  Increasing the state’s employment by even one percent – 91,000 – would cost ninety-one billion dollars at the cost of one million dollars per job for recent projects, assuming that enough large new job attractions were possible to enable that large an employment increase.  In fact, most job creation occurs at existing businesses, not at new facilities attracted because of government subsidies, while very few large manufacturing investments take place in a given year. 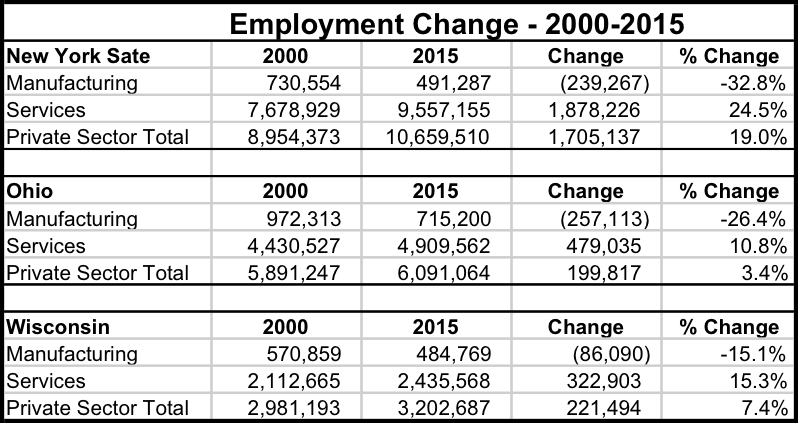 Because potential job growth continues to be likely to occur almost entirely in the service sector, focusing state resources on attracting manufacturing employment has a high opportunity cost.  Instead, policies and programs to support existing manufacturers in a region can be useful.

Upstate’s relative economic weakness is partly explained by the changing factors that drive location decisions in manufacturing and service industries. For manufacturers, upstate New York is a less attractive location than it once was because of factors including its location relatively far from the country’s population center, relatively high labor costs, difficult environmental permitting processes and relatively small and tight labor markets.  But, because manufacturing provides only about 10% of jobs upstate and nationally, manufacturing employment is a less significant economic driver than employment in other sectors is.

For high value added service industries, upstate New York suffers from relatively shallow labor markets, its relatively low percentages of college graduates compared to places like New York City and Boston, and the increasing concentration of industries in a few large companies headquartered in major cities.  Although the region has some significant strengths in higher education and health care, it has lost a number of corporate headquarters in financial services, because of the increasing concentration of the industry.

None of the problems faced by upstate New York, or for that matter, those parts of Ohio and Wisconsin that have stagnant economies, are easily resolvable.  But, leaders should recognize that the resurgence of these areas will not result from a policy of attracting manufacturing jobs to them – there are just too few opportunities to attract companies like Solar City, Foxconn or Global Foundries, and the cost is exorbitant.  Instead, leaders need to do what they can to anchor the companies in their area that have the potential to grow.  In most cases, those are service industries.  For these businesses, robust labor pools with appropriate skill sets are far more critical than the financial incentives or permitting issues that were critical to attracting large manufacturing facilities.