Predictably, Amazon’s decision to abandon its HQ2 project with 25,000+ future jobs in New York City  led to acrimony with opposing politicians and some commentators blaming the company for abandoning its effort.   Representative Alexandria Ocasio-Cortez, an early project opponent tried to re-frame her stance saying, “We do not have to settle for scraps in the greatest city in the world.  We deserve far more and can ask for more, and if they don’t want to negotiate, that’s their problem, not ours.”  But, on February 1st, she had argued,  “Nothing Amazon has said or done – including selling facial recognition technology to ICE & its intent to fight against worker unionization – would lead us to believe it could be a good or healthy neighbor for NYC,”

A Cuomo Administration source to the Albany Times-Union blamed Amazon’s withdrawal on vocal opposition from Senator Michael Gianaris, whose district included the Long Island City site, and on Senate Majority Leader Andrea Stewart-Cousins. Stewart-Cousins’ decision to appoint Gianaris to the Public Authorities Control Board (PACB) “indicated to the company that the entire Democratic majority, and not just Gianaris was opposed to the project.”

Ocasio-Cortez’s and Stewart-Cousins’ messages to Amazon were hardly welcoming.  Their positions showed that New York could not promise that its governmental leaders would work together to make Amazon’s project a reality.  Amazon’s statement withdrawing from the New York project stated, “A number of state and local politicians have made it clear that they oppose our presence and will not work with us to build the type of relationships that are required to go forward with the project…”

At best, the project’s opponents overplayed their hands in the negotiating process.  At worst, they showed a serious disregard for the creation of thousands of well-paying jobs for New York’s residents.  Perhaps they failed to recognize that Amazon and other businesses that could potentially locate within the state would be unwilling to risk timely project completion to time-consuming debates about incentive packages or about their fitness as corporate neighbors. 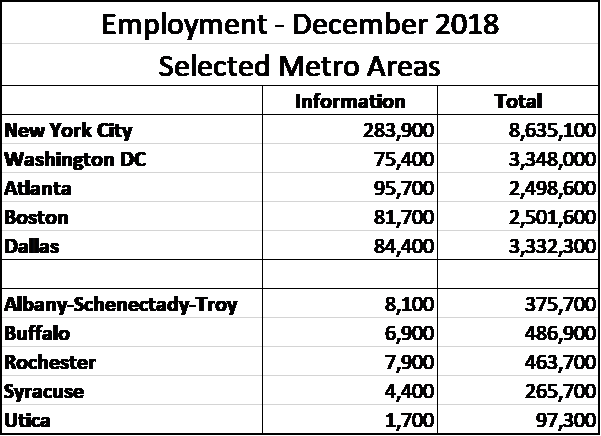 New York City had significant advantages as a business location for Amazon, perhaps the largest of which was the metropolitan area workforce, the largest in the nation, with its high concentration of information technology workers.  But, New York’s labor market advantages weren’t large enough to rule out other competitors.  Metropolitan areas like Washington, DC, Boston, Atlanta and Dallas had large enough labor pools to meet Amazon’s needs. In the wake of Amazon’s decision, other New York metros have offered themselves as alternatives but simply lack enough potential employees for a large information technology business headquarters.

But New York also had significant disadvantages.  Large projects in New York City are often difficult to develop because decision processes give vocal critics opportunities to delay or prevent them.  And, critics are often vocal in New York City.  In this case, the emergence of so-called “Progressive Democrats” who took office in the State Senate and Congress in the most recent election combined with neighborhood critics who feared the impact of the large Amazon project on their neighborhood.  The split among government leaders contrasted with northern Virginia, where according to Amy Liu of the Brookings Institution in the New York Times, “the Governor’s office, key state legislators and city and council officials worked together to address anticipated concerns from their constituency.”

Amazon’s proposed HQ2 project is unique – initially offering 50,000 jobs – more than any business expansion project in memory.  Economic logic tells us that Amazon had tremendous market power in making its decision.  Because of America’s Federal system, states can freely compete with each other to attract businesses.  Given that, it should not be surprising that there was intense competition between locations seeking to be home to the project.

States Use Incentives as Marketing Tools

States and localities market themselves by advertising the availability of tax incentives to businesses.  New York has been among the most aggressive in promoting them emphasizing the value of incentives available to companies that promise to create jobs.  State marketing marketing materials claim that “You’ll find all forms of tax incentives, business incentives and tax credits in New York State, all designed to benefit small or expanding businesses as well as film and TV production companies.” and that the state “offers new and expanding businesses the opportunity to operate tax-free for 10 years.”   In another place on the Empire State Development website, the text states, “Firms in the Excelsior Jobs Program may qualify for four fully refundable tax credits”   New York City has a set of  tax credits aimed at encouraging business investment in specific locations.

New York used incentives to attract businesses, spending billions of dollars to encourage technology development at Global Foundries in Saratoga County and at the Tesla Gigafactory 2 in Buffalo, among others. These technology related projects carried high risks. Tesla’s Buffalo venture, for example, is far short of the number of jobs that it promised to create and a film hub, developed in Syracuse, never attracted enough users to make it viable. A semiconductor manufacturer (ams AG) dropped plans to build a facility in Oneida County despite a substantial incentive package.

Amazon’s project was different, carrying relatively little risk for New York State.  Amazon is the market leader in internet commerce.  Though the deal was expensive – possibly more expensive than it needed to be, at least the tax credit incentives were performance based, and the capital grant would have contained recapture provisions if the company failed to meet job requirements.

Amazon received hundreds of proposals from localities hoping to secure the facility. New York’s winning $3 billion offer (about $1.7 billion from the state and $1.3 billion from the city) was not the largest. Offers from New Jersey ($7 billion) and Maryland ($8 billion) for the entire 50,000-job site were larger.

A number of commentators have blamed Amazon for being greedy for taking advantage of the incentives that states and localities create to lure businesses to operate within their borders.  For example, David Leonhardt in the New York Times wrote, “For years, companies have been getting the better of local governments — and taxpayers — by pitting them against one another. If a city or state won’t pony up cash or tax breaks, companies threaten to go elsewhere.”

Leonhardt’s  piece argues that states and localities are helpless victims of corporate greed.  In fact, governments are eager participants in corporate location competitions.  When New York got AMD (later Global Foundries) to locate a large semiconductor manufacturing facility in Saratoga County more than one billion dollars in total incentives were offered the company.   But, New York sought out semiconductor manufacturers, not the reverse.  The state had initiated a campaign to lure a facility to the state years before the deal was made.  The billion dollars in incentives was a lure, not the result of a bidding war.

Virtually all states and many localities market themselves to businesses.  Because location costs are often a factor in corporate decision-making, governments sell themselves as low cost locations, and use incentives, including tax incentives and cash grants, as marketing devices.

Critics of these practices correctly point out that the use of business location incentives has several negative effects.  They create disadvantages for existing local businesses that do not receive them.  In cases where incentives go to companies that would have created jobs within the state without their benefit, they reduce revenues that would be available for needed government programs.

Advertising the value of tax incentives to businesses increases the cost to state residents of attracting new jobs.  New York advertises its Excelsior program as providing “A credit of 6.85% of wages per net new job [and]and an investment tax credit valued at 2% of qualified investments”  creating expectations by companies that like Amazon that they would be eligible for credits, even though the credits are discretionary and subject to a budgetary cap.

Given that the Excelsior Jobs Tax Credits that Amazon was offered were valued at $1.2 billion and that the company would have received $1.3 billion in tax credits from New York City, it is likely that they increased the size of New York’s offer beyond what it might have been if the credits had not been advertised by the state.

Amy Liu, writing in the New York Times reported that in contrast to New York’s approach, “Virginia offered Amazon $550 million in job-creation grants, which the company will receive only after delivering the proposed 25,000 jobs, with additional subsidies available if the company creates as many as 37,850 jobs….Virginia threw into the package more than $1 billion in additional taxpayer funds to build a pipeline of technical workers and improve transportation. This portion of the “subsidy” will not go directly into Amazon’s pockets but into Virginia schools, universities, and local agencies. It is nearly twice the amount offered to Amazon, a signal that investing in the local work force is more important than offering sweeteners to Amazon.”

Another New York practice that may have ballooned New York’s offer is the State’s practice of paying out incentives over long periods of time.  In Amazon’s case, the Excelsior Jobs Tax Credit would have been paid out over ten years.  10 years.  The state’s estimate shows that half the $1.2 billion in tax credits would be paid in years eight through ten of the benefit.  The  $505 million capital grant would have been paid over 15 years in proportion to the company’s annual investment.  There is evidence that paying incentives later rather than sooner wastes government funds, because companies heavily discount payments received far in the future compared to those to be received in the near term.  Timothy Bartik of the Upjohn Institute for Employment Research found that front loading incentives “has more effects on firms’ location decisions per dollar of incentive costs because firms heavily discount the future.“

The practice of providing financial incentives to businesses to locate within states and localities is destructive in a number of ways.  It invites states and localities to give away needed revenues in order to attract jobs.  It creates inequalities between companies that get benefits from government and those who don’t, creating the potential for crony capitalism.  It distracts government of focusing on improving infrastructure and investing in human capital.

Unfortunately, because of America’s federal system, states have the ability to set tax policy and use it to compete with each other for jobs.  Voluntary efforts by states to refrain from incentive competitions have been ineffective in the past because of the high stakes involved in foregoing potential job creation.

Because of its excessive reliance on tax incentives, New York likely pays more to companies for job creating projects than it could if it did not rely so heavily on them.  The incentives create company expectations that they can receive generous tax long term tax breaks if they invest in New York.  A policy that relied more on negotiated grants with strong claw-back provisions in the event of non-compliance with job creation requirements paid to reimburse corporate investments  would provide a better return on the state’s investment.

Although New York could have structured its Amazon incentive package more efficiently, the loss of 25,000 well-paying jobs (or more) to New York City is important both because of the foregone opportunity for area residents, and because it says to companies considering future projects in the city that New York’s political leadership is split between forces that welcome job creating projects and those who oppose them for a variety of reasons.  Perhaps the Governor and Mayor could have paved the way to a better reception from local political leaders by offering more involvement at an earlier stage, but given New York’s fractious political environment, it’s not certain that additional consultation would have eliminated objections from powerful local officials.

A version of this post appeared in the Rochester Beacon, titled “New York City’s Amazon Debacle”