This is an expanded version of the essay, “False Stereotypes Harm People in Poverty” that appeared in the Rochester Beacon, containing additional information relating to the five largest upstate metropolitan areas.

Misconceptions about people in poverty appear to drive proposed changes in social welfare policy, particularly the work requirements either being promoted by the Trump Administration and discussed or implemented in several states. A fuller understanding of factors underlying the problem of poverty suggests that these policies will be counterproductive, neither reducing the incidence of poverty nor helping those individuals and families targeted by these new policies.

The concentration of poor black and Hispanic people in central cities has allowed politicians to characterize the poor as “others”- people unlike white suburban majorities in upstate metropolitan areas, and to disparage them as dishonest, lacking in ambition and willingness to work.

For example, Ronald Reagan claimed the existence of a “welfare queen”, who supposedly cheated the government of $150,000.  Josh Levin, in “The Welfare Queen” describes Reagan’s line of argument, “When he ran for president in 1976, many of Reagan’s anecdotes converged on a single point: The welfare state is broken, and I’m the man to fix it. …. In Chicago, they found a woman who holds the record,” the former California governor declared at a campaign rally in January 1976. “She used 80 names, 30 addresses, 15 telephone numbers to collect food stamps, Social Security, veterans’ benefits for four nonexistent deceased veteran husbands, as well as welfare. Her tax-free cash income alone has been running $150,000 a year.”

The story was untrue.  The real welfare queen had defrauded the government of $8,000 using a few false identities.

Reagan was not alone in stoking resentment against poor beneficiaries of government assistance.  Donald Trump more recently claimed that, “I know people that work three jobs and they live next to somebody who doesn’t work at all. And the person who is not working at all and has no intention of working at all is making more money and doing better than the person that’s working his and her ass off.”  Trump also claimed in 2011, the existence of “a food stamp crime wave.”  Neither of these claims was supported by evidence.

Like much of the public, Trump believes that most black people are poor.  The New York Times reports that, “Trump also said to black voters: “You’re living in poverty; your schools are no good; you have no jobs.”

Those who see people in poverty as “others” are more likely to ascribe their condition exclusively to lack of personal responsibility, ignoring other factors, like education, disability, racial discrimination and family structure.  These beliefs often lead to support for coercive government assistance policies for the poor, such as work requirements for medical, food and housing assistance. 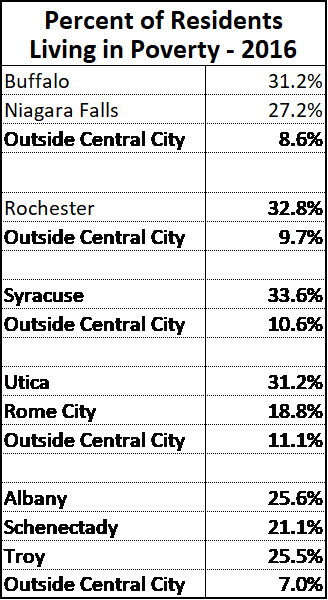 More than one in seven (540,000) residents of five upstate metropolitan areas – Albany-Schenectady-Troy, Buffalo-Niagara Falls, Rochester, Syracuse and Utica-Rome – lived in poverty in 2016, roughly comparable to the national average of 15%.[1] 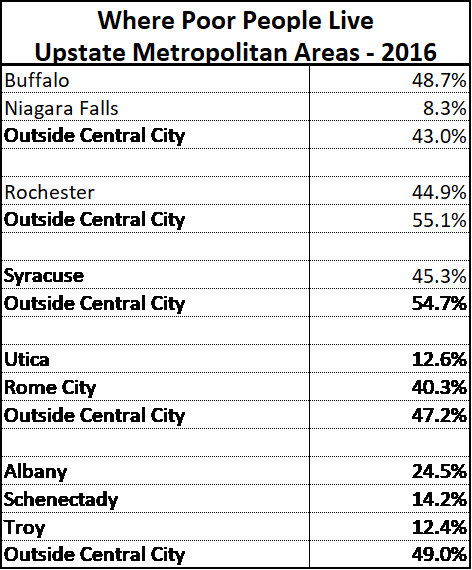 Because about only one in ten people living outside central cities in upstate metropolitan areas is poor, the suburban poor are relatively invisible despite their relatively large numbers, while those living in central cities, with higher poverty concentrations, are much more visible. 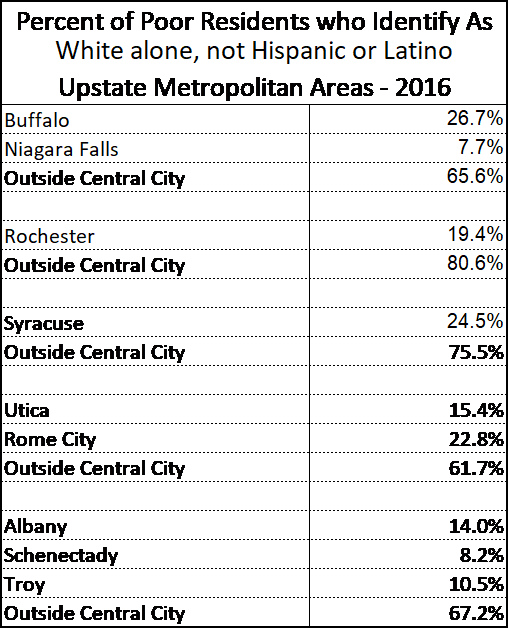 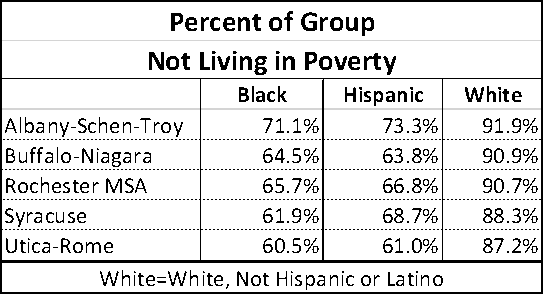 Similarly, there is a commonly held belief that most minority group members are poor.  But, in the United States, and in upstate New York metropolitan areas, most black and Hispanic residents do not live in poverty.  More than six in ten lived above the poverty line in 2016. 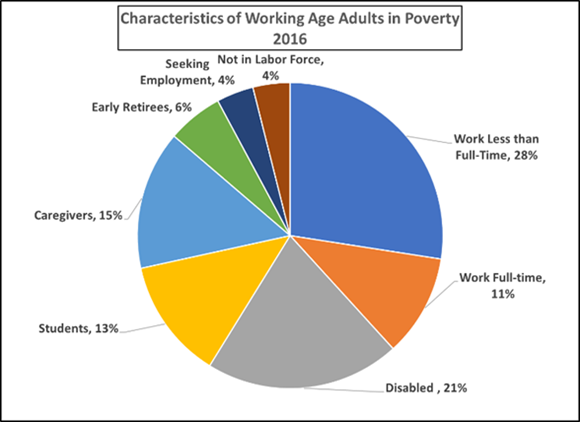 A Brookings Institution report notes that most of those who do not work nationally are caregivers (15%), students (13%), disabled (22%), or early retirees (6%). 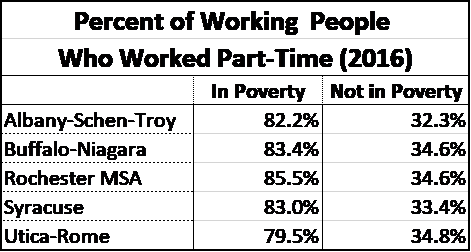 Poor people who work in upstate metropolitan areas were much more likely to work part-time than full-time in 2016.  In contrast, most workers who were not in poverty worked full-time. About 80% of working people in poverty in upstate metropolitan areas reported working part-time in 2016.  In contrast, only about one-third of working people not on poverty reported that they worked part-time. 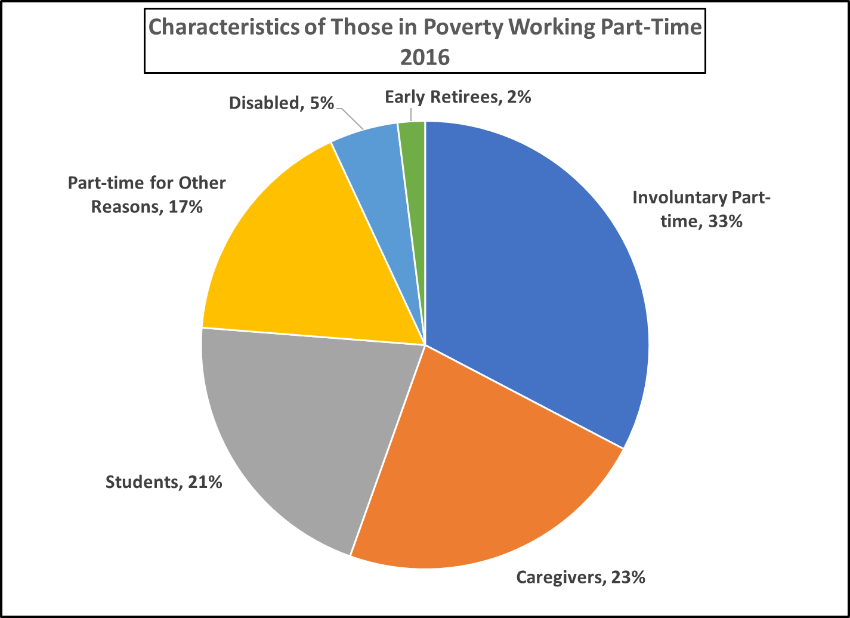 The high percentage of people who work less than full-time year around is the result of several factors.  A study by the Center for Budget Priorities points out that these include:

Stereotypes about people in poverty and their relatively low participation in the labor market have spurred policy proposals that make SNAP (food stamp) and Medicaid benefits conditional on beneficiaries participating in worker training or gaining employment.

President Trump’s Council of Economic Advisors (CEA) claims that employment levels of people on major government assistance programs are low: 60% of Medicaid recipients, 60% of SNAP (food stamps) recipients, and 52% of housing assistance recipients who were working age and not disabled worked less than 20 hours a week, or not at all.

The Council argues that “expanding work requirements, similar to those in place in TANF, to the three non-cash welfare programs discussed here (Medicaid, SNAP and housing assistance) would affect the majority of program recipients and require major increases in the work effort of non-disabled working-age adults, potentially helping recipients and their families.”

The CEA substantially overstates the number of poor people who receive government assistance who do not work. A Center for Budget and Policy Priorities analysis of the workforce participation data from the Council of Economic Advisors concluded it was based on a significant methodological error.  The CEA report looked at “whether an individual receiving assistance worked in a single month (December 2013), ignoring the fact that many workers have unstable jobs and receive help when they are between jobs.”

A report by the Brookings Institution, “Work Requirements and Safety Net Programs” shows  “42 percent being out of the labor force and roughly 11 percent unemployed in the one-month snapshot – leading to more than half of the group being labeled “not working” in the one month snapshot – [but] roughly 29% are out of work and just one percent are persistently unemployed over two years, meaning fewer than one third are not working consistently.”

Many people in poverty work less than full-time year around involuntarily.  If their work is seasonal or they have been subject to layoffs and recalls to employment, they would be likely to be subject to potential denials of benefits at those times when they were out of work – precisely the times that assistance would be most needed.  The Center for Budget Priorities report points out that

To be sure, personal responsibility can be a factor in poverty. Single parents are much more likely to encounter poverty, for example. It certainly makes sense to implement policies that educate and remind people of the difficulties faced by single parents, encourage family planning, and hold absent fathers responsible for a share of the cost of raising children.

Instituting additional work requirements for participation in programs like SNAP and Medicaid would likely reduce participation levels and would increase administrative costs associated with compliance requirements.  Many of those who could lose benefits would lose assistance when they most need it.  Brookings found that “For those who qualify for exemptions, satisfy waiver requirements, or work enough to meet the requirements, there are still significant informational and administrative barriers to compliance. Program participants must understand how the work requirement policy relates to them, obtain and submit documentation, and do so at the frequency prescribed by the state (Wagner and Solomon 2018) …. These continuing roadblocks to participation, with attendant informational and transactional costs, are likely to result in lower take-up among the eligible population and disenrollment (Finkelstein and Notowidigdo 2018).”

An analysis of the implementation of work requirements for Medicaid in Arkansas by the Kaiser Family Foundation found that recipients lost benefits because “Many Medicaid enrollees [were] still not aware of program changes despite substantial outreach.  In addition, an online reporting requirement is proving difficult for many enrollees due to limited knowledge of the requirements as well as lack of computer literacy and internet access,”

The fundamental question that these approaches raise is whether the government should condition access to essentials for human life, such as government provided food or health care coverage for unemployed poor people, on participation in training programs or gaining employment.  If such an approach is an acceptable incentive, why not limit public schools, police and fire services to those who work as well?

Because of false stereotypes about people in poverty that emphasize their differences from white suburban majorities, attitudes of much of the public to programs like SNAP and Medicaid and the poor people who receive assistance from them are negative.  Politicians have fostered these attitudes by promoting ideas like the “welfare queen” who supposedly abused the system, and people who don’t work who do better than those who “work his and her ass off.”  They use these stereotypes to promote punitive approaches to policies that help people in poverty pay for food, receive medical care and find housing.  These coercive policies are not responsive to the practical obstacles  confronted by individuals and families in poverty. Instead, they will further harm some who need assistance.

[1] Note that the official measure of poverty does not reflect the market value of food stamps or tax benefits like the earned income tax credit.

[2] Residents of counties outside the New York City metropolitan area.