The November election brought a marked change in the composition of the New York State Senate that will have significant implications for upstate New York residents.  Tom Precious in the Buffalo News noted, “Majority party rules and minority party lawmakers are left with table scraps when it comes to funding and policy matters.  As a result, millions of upstate residents could see themselves lose the sole remaining seat at the table in closed door Capitol talks…”[1]

Kent Gardner wrote in the Rochester Beacon, “A New York State Legislature wholly controlled by downstate interests won’t stop sending education aid Upstate or close the state parks…. Complete control of the NYS Legislature by downstate reps will change things over time. Party aside, upstate has a lot at stake in this election.”

This post will seek to answer two questions:  Why did Republicans lose control of the State Senate, and why does upstate have so little majority party representation?

Republicans had controlled the State Senate from 1966, with only a brief break in 2012, when Democrats gained a majority and then splintered into two factions – one of which joined the Republicans to form a majority.  But in 2018, voters decisively gave control to Democrats, who will hold 40 of 63 seats.  The loss of Republican control will significantly reduce upstate’s representation in the party controlling the Senate, since only three seats outside the New York metropolitan area are held by Democrats.  In the most recent legislative session, 18 upstate Senators were in the Republican/Reform Democrat Senate Majority. 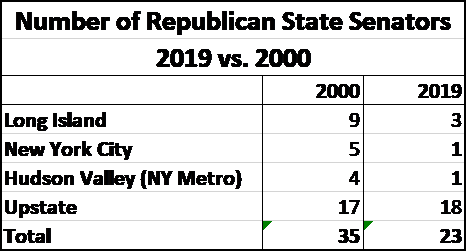 For many years, the Republican Senate majority was composed of a coalition of upstate, Long Island and Hudson Valley members.  In 2000, Republicans maintained control in the State Senate by winning 35 of 61 districts in all parts of the State – 17 in upstate New York, nine on Long Island, five in New York City, and four in the Hudson Valley portion of the metropolitan area.

In 2018, Senate Republicans won only three seats on Long Island, one in New York City and one in the Hudson Valley portion of the metropolitan area.  Only in upstate New York did the party increase its strength – to 18 seats.

In upstate New York, only three of 21 State Senators will be Democrats.  Ironically, had the Senate’s legislative district apportionments more accurately represented voter party preferences, about half of upstate’s Senators would be Democrats.

Upstate’s majority party representation in the State Assembly will now be stronger than in the Senate.  Twenty-three of 48 upstate seats in the Assembly will be held by Democrats.[2] 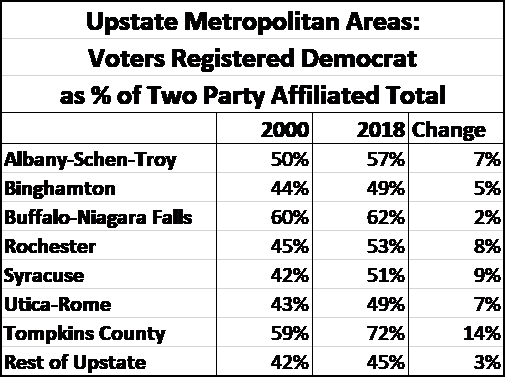 Upstate party registrations have shifted toward the Democratic party – from 47.3% to 52.7% between 2000 and 2018.  In 2000, in most upstate metropolitan areas Republicans and Conservatives were a majority of voters affiliated with a political party.[3]  By 2018, Republicans were in the majority in Binghamton and Utica, but Democrats (with Green Party, Working Family Party and the Women’s Equality Party) had majorities of party affiliated voters in the Albany-Schenectady-Troy, Buffalo-Niagara Falls, Rochester, and Syracuse metropolitan areas and in Tompkins County.

The significance of the split between registered Republicans and Democrats is somewhat weakened by the large number of upstate voters who are unaffiliated with a political party. 890,000 of the 3.84 million registered voters in upstate New York fall into this category.

Also note that the Independence Party was not included in this analysis because its candidate affiliations have been inconsistent.  Initially, In New York State, the party supported Tom Golisano, a wealthy Rochester businessman who ran on conservative a platform in 1994, 1998 and 2002.  More recently, the party has supported Democratic Gubernatorial candidates Eliot Spitzer and Andrew Cuomo.  The Independence Party is by far the largest splinter party in upstate New York, with 213,000 members. 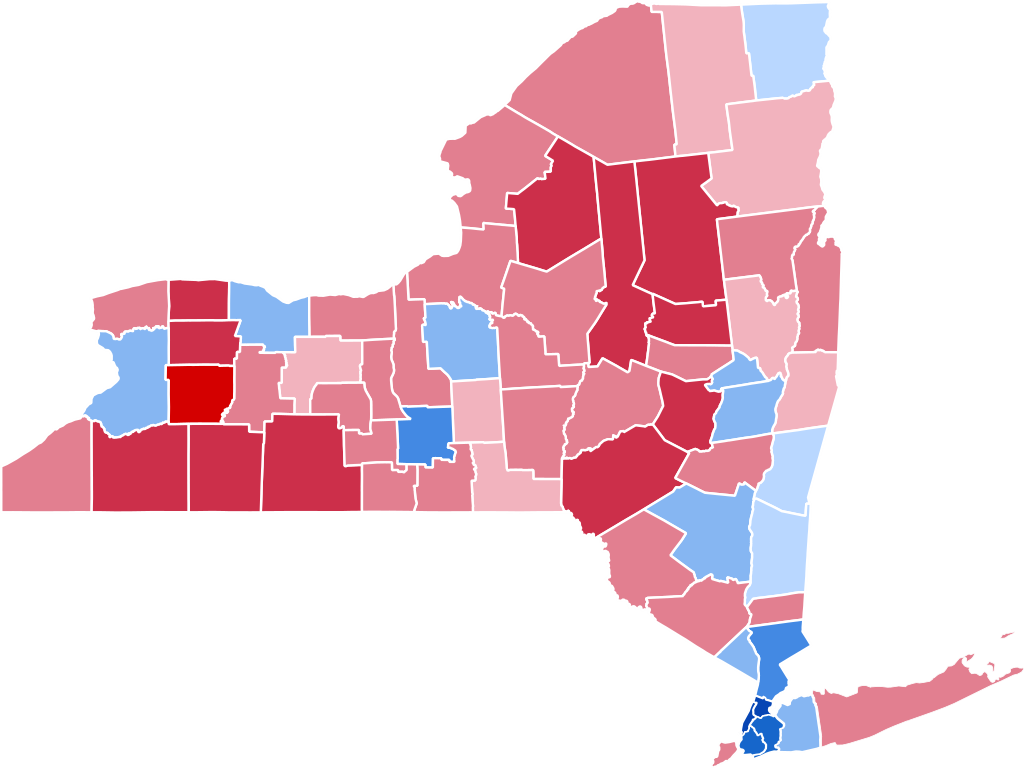 This map, above (from Wikipedia), of the 2016 Presidential Election result suggests that Republican voters (in red) dominate upstate New York.  Other than metropolitan counties like Albany, Onondaga, Monroe and Erie, and a few counties in the Hudson Valley, most of upstate New York voted for Donald Trump, the Republican nominee.

This map looks like Republicans dominate upstate, but most of the red colored Republican Counties are sparsely populated, while the blue Democratic areas are population centers. And, the map is based on a single race. Voter preferences are more complex than can be captured in the results of a single face-off. 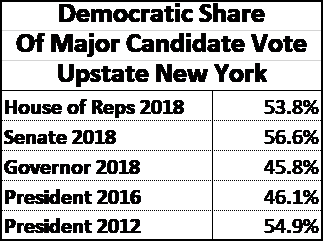 Contests for Congress and for Governor show that voting in elections in upstate New York is closely divided between Republicans and Democrats.  Republicans had more votes than Democrats upstate in the 2016 election for President and the 2018 election for Governor, but more votes were cast for Democrats in the 2012 Presidential election and the 2018 Senate and House of Representatives elections.

Why Upstate State Senate Representation Does Not Reflect Voter Preferences

Upstate representation in the State Senate does not reflect underlying party preferences as measured by party registration or voting behavior.  Democrats only hold three of twenty-one upstate State Senate seats, even though races at the State and Congressional levels have been highly competitive, with Democrats winning 5 of 9 upstate congressional districts in 2018, and 23 of 48 Assembly seats as well as gaining more votes in one of two presidential elections and in the most recent U. S. Senate election.  Why is the Senate unrepresentative of upstate party preferences and election performance?

When I began researching this question, I assumed that the primary cause of the difference in electoral results in upstate State Senate districts and other elections had to be legislative district gerrymandering.  After all, what else could explain the fact that Republicans control 18 of 21 districts, even though party preferences are about evenly split between the parties?  Though there is clear evidence that the controlling parties in the Legislature structured districts to favor members of their own parties, another factor appears to be important.  Republicans continue to succeed in electing candidates in upstate Senate districts where there are more Democrats than Republicans. 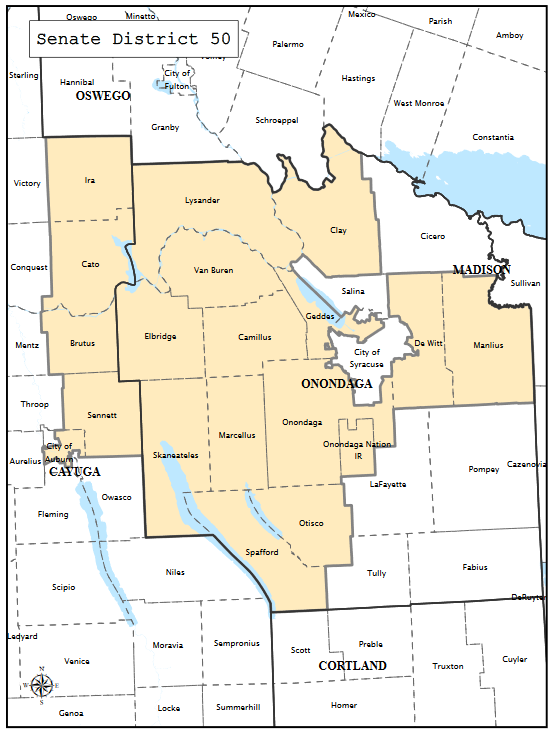 For example, State Senate District 50 in the Syracuse Metropolitan Area was carefully constructed to include suburban Republican votes, while excluding Democratic votes in the city of Syracuse.  The seat was held for many years by Senator John DeFrancisco until his retirement this year.  In the 2018 election, another Republican, Bob Antonacci, was the victor. 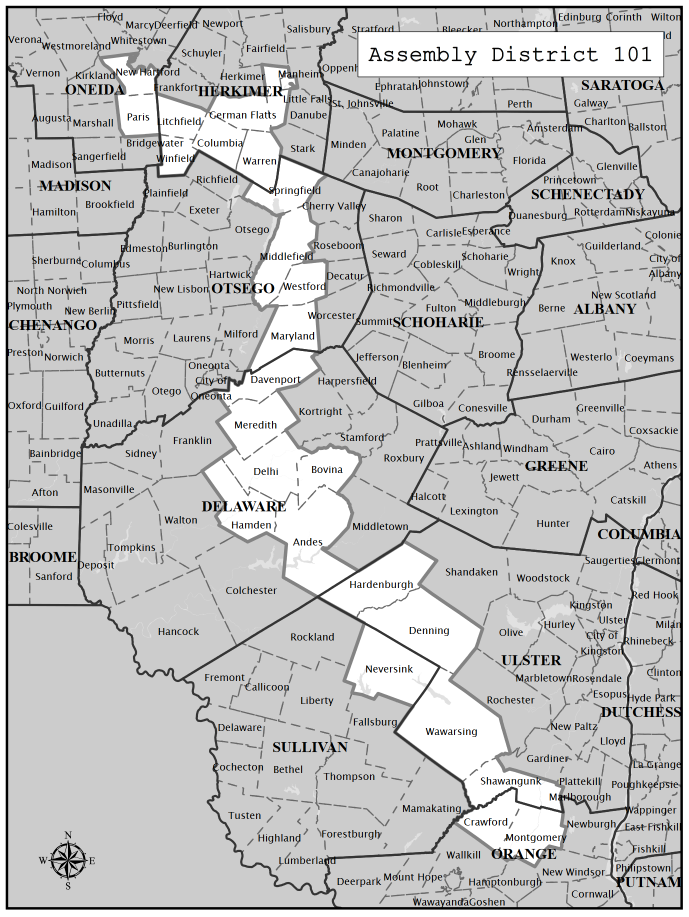 Assembly District 101, which looks like a worm that connects the town of Montgomery, just west of Newburgh with New Hartford – a suburb of Utica – is another example. The district, which carefully avoids nearby cities (with higher Democratic enrollment), is about 150 miles long and includes parts of Oneida, Herkimer, Otsego, Delaware, Ulster and Orange Counties! It is held by Republican Brian Miller.

Gerrymandering in the legislative apportionment process attempts to make one party waste as many votes as possible by concentrating voters in that party in overwhelmingly one-party districts, while spreading votes in the party benefiting from the gerrymander across districts in smaller, but safe majorities.

Since the mere requirement of population equality does not necessarily result in the creation of legislative districts that come close to reflecting the political preferences of residents, political parties within legislatures have taken advantage of the opportunity to maintain control, often creating legislative majorities that are much stronger than voter preferences would indicate, or in some cases, maintaining control despite the fact that only a minority of voters prefer them. Misalignments between voter preferences and public policy result from partisan gerrymanders.

Additionally, upstate Senate districts on average have fewer residents than downstate districts in order to strengthen upstate’s presence.  The difference in district sizes increased the region’s representation from 20 to 21 seats.  Under the law, legislative district populations may vary by 10%.

In upstate New York, State Senate districts were engineered to break up metropolitan areas into a series of districts that also contained large numbers of non-metropolitan residents, predominantly Republican voters.  The result has been to weaken the ability of democratic leaning metropolitan area voters to elect representatives who shared their political preferences.

Similarly, the Rochester MSA, with a population of 1.1 million has enough residents to populate three and one third Senate districts but has been split into five Senate Districts including substantial non-metropolitan populations.

Viewed purely with “sectional” eyes, upstate New York’s influence in Albany may have been greater because Republican gerrymandering granted upstate control of one of the Legislature’s two houses.  But that power meant that the views of about half of upstate’s residents – Democratic voters who make up the majority of residents of metropolitan areas – were underrepresented in the State Legislature.  The upstate Republican leadership of the State Senate primarily represented the interests of conservative rural and suburban residents.  Upstate city residents and people whose policy views corresponded with Democratic party positions received little Senate attention.

With Democratic party control of the State Senate, upstate now has less majority party representation than it would if Senate districts had not been gerrymandered in favor of Republicans, weakening the region’s voice in the State Capitol.

To be sure, fairer legislative districts would not ensure particular outcomes in State Senate races, because voters do not vote for parties in legislative elections any more than they do in elections for Governor or the U. S. Senate.  The large difference in the percentage of upstate voters who favored Andrew Cuomo (46%) against Republican Marcus Molinaro compared with the support given Kristin Gillibrand (57%) against Republican Chele Farley illustrates this point.  In fact, in much of upstate New York, party affiliations are relatively evenly divided, with electoral results in Statewide elections favoring each party in different races.

Reapportionment after the 2020 Census

Reapportionment after the 2020 Census is likely to create legislative districts that more accurately represent the partisan preferences of New York residents than past apportionments.  In 2012, New York voters passed a Constitutional amendment that reforms the apportionment process and institutes new Constitutional requirements for district representativeness.  The process is a mixed bag, containing features that could work against accurate voter representation, and others that could work for it.

The amendment sets up a ten-member redistricting commission with four members appointed by each of the major parties’ legislative leaders plus two additional members selected by the eight.  The amendment also requires that any plan developed receive the support from members nominated by both political parties.  The State Legislature must vote upon the plan submitted by the Commission without amendment. If two successive plans from the Commission fail to receive Legislative and gubernatorial approval, the Legislature is then empowered to present its own plan. As legislative approval is required, there will be an unnamed “third party” involved in the redistricting effort, the “Party of the Incumbency.” Logrolling and trading to preserve the prerogatives of incumbents and secure the required approvals may work against representation of voter preferences within legislative districts.[6]

The Constitutional amendment includes a prohibition against partisan gerrymandering, “[d]istricts shall not be drawn to discourage competition or for the purpose of favoring or disfavoring incumbents or other particular candidates or political parties.”  This important provision is intended to prevent the redistricting commission from manipulating district boundaries to advantage particular parties and candidates and  creates a constitutional basis for a court challenge to a legislative districting plan that is gerrymandered.

Because of the statewide shift in voter preferences to the Democratic party, Republicans are unlikely to retake control of the State Senate, at least in the near future.  Upstate New York is unlikely to have as much influence as it had in the past in the State legislature.  But if the  passage of the 2012 constitutional amendment achieves the goal of representational equity,   the Senators who represent it will be more likely to represent the policy preferences of upstate residents.

(Note:  An abridged version of this post appears in the Rochester Beacon, titled, “The Cost of Gerrymandering”)

[3] The Independence Party is excluded from the analysis.