Consider four families of four with two children living near Albany, New York. The breadwinners in the family had recently taken jobs that do not offer health insurance. As the Affordable Care Act was written, they were required to purchase health insurance. 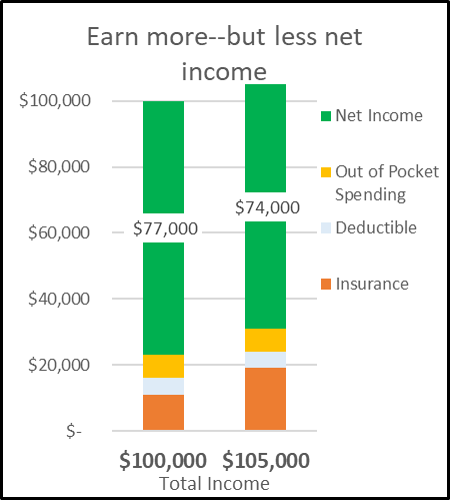 Families one and two earn nearly the same incomes. Family one has a household gross income of $50,000. When the family went to the New York Healthcare Marketplace http://newyorkstateofhealth.com/ , they found a policy through New York’s Essential Plan with no deductibles for $240 annually, with a cap on total medical expenses at $2,000. Their annual maximum health care cost could be $2,240 – 4.5% of the family’s income, leaving $47,760 for other family needs.

Family two earns just a little more with a household income of $55,000. They went to the state healthcare exchange and found a Federally subsidized middle priced (Silver) policy. They found that their children could be covered under a low-cost program (Child Health Plus) that would cost $720 annually, with no co-pays. But they would have to purchase insurance for themselves that with their children’s coverage would cost $4,500 annually. The plan would cover some preventive services, but all other care would be subject to a $5,000 deductible. This family could pay up to $12,000 in out of pocket costs. Their maximum annual health care cost could be $16,500 – 30% of family income, leaving $38,500 for other family needs–$9,000 LESS than family one.

Families three and four also earn nearly the same total income. Family 3 has a gross income of $100,000. They are also eligible for Child Health Plus but would pay $1,440 annually for their children’s coverage. The annual premium for the two adults in the household and the Child Health Plus coverage would be about $11,000 with a family deductible of $5,000 and out of pocket maximum of $12,000. Their maximum annual health care cost would be $23,000 – 23% of family income, leaving $75,560 for other needs.

Family four earns $5,000 more than family three. With household income of $105,000. They no longer qualify for any subsidized programs. Their annual premium cost would be more than $19,000 with the same $5,000 deductible and $12,000 out of pocket maximum. Their maximum annual health care cost would be about $31,000 – about 30% of their annual income. They earn more than family three but have less money left over after paying for health care.

In each case, the second lowest cost “Silver” policy was chosen for this study. For New York policyholders, where eligible, children are insured through the State’s Child Health Plus program, which offers insurance at a very low costs for children in families whose income is up to four times the poverty level (about $103,000 for a family of four). The cost of Child Health Plus is included in the premiums shown, where applicable).  Federal subsidies apply on a sliding scale to policies purchased on the exchanges for people with incomes of up to four times the poverty level.

The Federal Affordable Care Act (Obamacare) has a series of thresholds that place families with similar incomes in significantly different financial risk situations. While lower income families are relatively well protected, families with slightly higher incomes could face substantial financial burdens from health care costs. And, because health insurance policies purchased through ACA exchanges are structured to protect families from truly catastrophic costs, they expose families to smaller, but still potentially unaffordable health care costs that could amount to as much as 30% of annual gross income.

Though the ACA has succeeded in reducing the percentage of New Yorkers without health insurance to about five percent and ensures that people with pre-existing conditions can by health insurance, it has significant shortcomings because of the high healthcare costs that many insured New Yorkers continue to face. 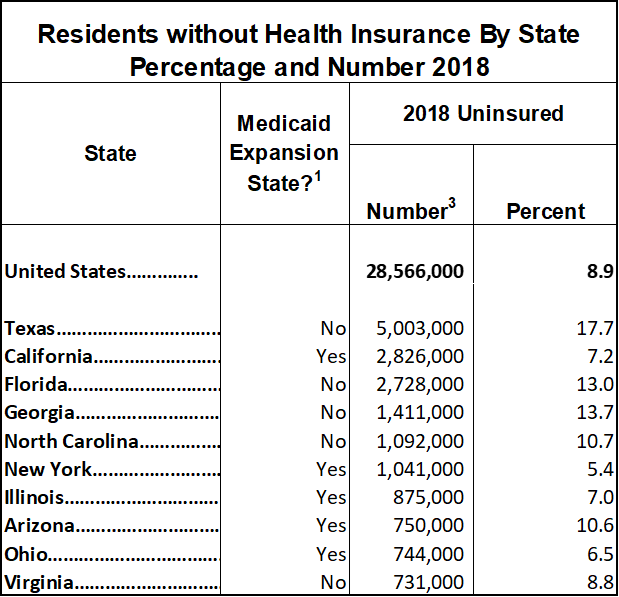 There are several significant weaknesses in the American system of health care coverage. Although Obamacare cut the number of people without healthcare coverage in half, 28.5 million Americans were not covered in 2018.

Because the Supreme Court made enhanced Medicaid coverage for individuals with incomes of up to 138% of the poverty level optional at the state level, thirteen states do not offer it. In those states, uninsured rates are as high as 18% (Texas). But, even in states like New York, many residents remain uninsured – in New York’s case more than 1,000,000.

The Affordable Care Act had two major components. The first, was an expansion of the Federal Medicaid program, making people with incomes of up to 138% of poverty level eligible for low cost coverage. However, a 2012 Supreme Court Decision made the program optional at the state level. Thirty-seven states, including New York, participate. The ACA also authorized states to establish programs to cover people with incomes between 138% and 200% of the poverty level to set up low cost health plans with no deductibles. New York calls its plan, “The Essential Plan”. The plan is administered by a group of Health Maintenance Organizations and offers very low premiums ($0 to $240 annually, depending on income) and low maximum out of pocket expenses ($200 or $2,000 depending on income).

The second element of the ACA is the establishment of state health care exchanges that offer health insurance policies that include Federal subsidies to individuals with incomes of up to four times the poverty level ($103,000 for a family of four). Under the law, everyone who did not have health insurance was required to purchase a policy, though the tax penalty for not carrying insurance was much lower than the cost of insurance premiums, particularly for families. The penalty was repealed in 2018.

Three levels of health insurance coverage are offered through the ACA. Premiums are relatively high – in Erie County, New York, premiums for a family of four earning $85,000 range from 6,268 to 11,869 depending on coverage level. Bronze policies cost the least but have higher deductibles and out-of-pocket expenses than Silver and Gold policies. In the case of Erie County, a family of four earning $85,000 would pay $5,000 less in annual premiums for the Bronze policy than the purchase of a gold policy. But Bronze policies have potentially higher maximum health expenses than more expensive policies – in this case about $2,600 higher, and deductibles are much higher – $16,000 compared to $1,200. 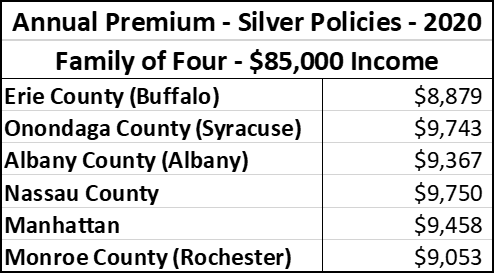 The costs of plans purchased within states vary from area to area, reflecting differences in medical costs, though not by large amounts. In New York, Silver policies for families of four with incomes of $85,000 ranged from $8,900 in the Buffalo area to $9,750 in Nassau County.

Even with available Federal subsidies, families would find health insurance policies purchased through state run marketplaces to be quite expensive. In a group of four states studied, for a family of four with an income of $85,000, premiums for so called “Silver” policies ranged from $8,400 annually in the Hartford, Connecticut area to $11,016 in Essex County, New Jersey. At the same time, “Silver” policies – the second highest level of coverage – have high maximum out of pocket costs – $16,300 in Connecticut and Colorado, and $12,000 in New York and New Jersey. Families that reached the maximum out-of-pocket cost would have premium plus out-of-pocket expenses in a year of more than $20,000 – nearly 25% of gross income.

Deductibles are high with the “Silver” policies studied. – ranging from $4,000 in New Jersey to $8,400 in Connecticut. While some preventive care is provided at no cost or with a small co-pay to insureds, high deductibles have led many policyholders to perceive that the insurance offers little real value.

Typical American families had about $6,000 in discretionary income after paying for necessities in 2014.  Healthcare expenses of more than $20,000 would pose a considerable strain on their finances, and for those families that had high medical expenses over several years, the result could be bankruptcy.

The effect of the combination of subsidy programs is that people at different income levels have very different potential healthcare expenses. Two “cliffs” where program eligibility changes are the cause of these differences. Because the state’s Medicaid Expansion program has an income limit of $51,500, people whose income is above that level could have potential annual healthcare expenses of more than $16,000, while those with incomes below that level would see their expenses limited to $2,200. The second cliff occurs at the level where the health care exchange subsidies phase out – $103,000. At $100,000, maximum expenses in this case would be about $24,000, while at an income of $105,000 it would be $31,000. 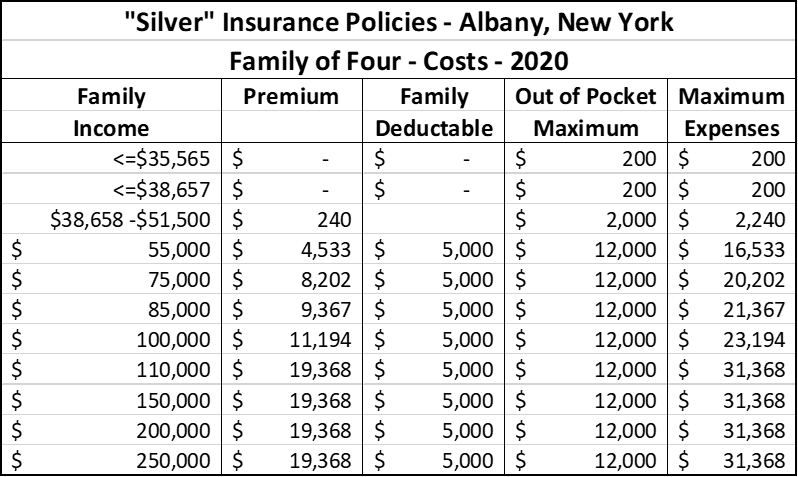 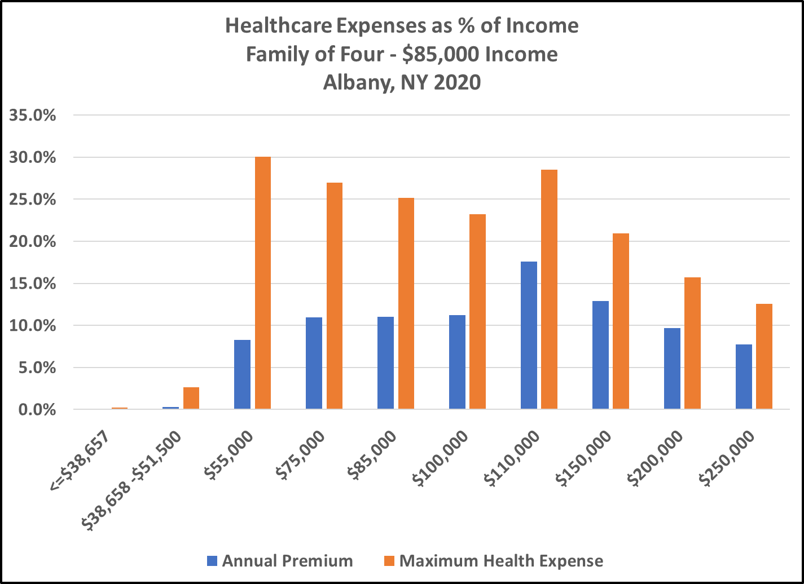 From a need perspective, the current system has significant shortcomings. While it is effective in making health insurance affordable for relatively low-income families earning $51,500 or less, healthcare costs can consume a large share of income for families whose incomes are just above one of the thresholds noted above.

Policy premiums, even after subsidies, pose relatively heavy burdens for families with modest incomes. Before the ACA, many families had chosen either not to purchase insurance at all, (in some cases because policies were unaffordable because of pre-existing conditions) or to buy a very basic plan which could leave them with catastrophic uncovered costs. No doubt many families that were required to purchase comprehensive health insurance found that their budgets were significantly disrupted by a new Federal requirement that they find $5,000 to $9,000 each year to purchase it.

The Affordable Care Act was an incremental solution intended to remedy the failure of America’s health care insurance system to cover all residents. By attempting to work within the existing mix of private and government insurance, a set of inequities resulted. These problems arise largely from the decision to integrate the new requirement to purchase health insurance with the existing mechanisms for delivering healthcare coverage and the cost constraints that the program’s designers imposed.

To remedy the discontinuities and provide more perceived value to policy holders, health insurance policies would have lower deductibles and out-of-pocket maximums – both of which would increase policy costs. Program subsidies would need to be increased, by reducing the percentage of income that policyholders would pay and increasing the maximum income at which they would be available.  Both options would significantly shift costs from exchange users to Federal taxpayers.

The program’s authors faced a dilemma: since most people earning enough to buy through the exchanges are currently covered by employer provided insurance, offering larger subsidies to those who were required to buy insurance in the individual market would create a perceived inequity, since employers do not receive government assistance for the policies that they provide. Only 11.4 million people are covered by the healthcare exchanges, while 156 million people receive coverage from their employers. To pay for the subsidies, which would cost substantially more than those ultimately created, new or increased taxes would be required of people and businesses that would not benefit.

In this case, the effort to reform healthcare with a mix of private and public funders resulted in a program that provides significant help to some lower income New Yorkers to get healthcare coverage at a reasonable cost, but leaves others exposed to potentially unaffordable premiums and out-of-pocket costs.

Increasing insurance affordability for policyholders could increase overall healthcare spending if, as is likely, they use healthcare more. Additionally, it could encourage more people to take advantage of the subsidies provided through the exchanges. Overall health care expenditures would rise, because people who do not have insurance use healthcare services at only half the rate of those who are insured. Because the 11.4 million people insured through the exchanges are only 3% of the total insured population, the impact would be relatively small compared to the total cost of health care, though marketplace subsidies – currently about $50 billion annually — would increase significantly.

Note:   An abridged version of this post appears in The Rochester Beacon.