Pew Research has been releasing a series of studies showing that the percentage of Americans who have middle class incomes has been declining.  The most recent of these is  America’s Shrinking Middle Class:  A Close Look at Changes Within Metropolitan Areas.  The report received extensive coverage in many newspapers, including the New York Times.  It concluded that in nine of ten metropolitan areas, the middle class lost ground – from 61% of the population in 1971 to 49.5% in 2014.

The Pew findings are a result of the widely reported increase in income inequality that has developed in the United States since about 1980.

The data shows that income gains were concentrated among those with higher incomes. In fact, middle to low income households have seen no significant real (inflation adjusted) income gains since 1967. And, since 2000, real household incomes have stagnated at all levels.  Because income gains between different income groups have diverged, the percentage of Americans who live in the middle class has declined.

Pew found that in New York Sate, each metropolitan area studied saw a decline in the percentage of residents whose incomes were classified as middle class.  For the purpose of their study, middle class was defined as the range between two thirds of the median household income and twice the median.  Albany-Schenectady-Troy showed the largest decrease- 5%.  On average, the percentage or residents with middle class incomes decreased by 3.9%.

The 3.9% average decrease in middle class residents in upstate metropolitan areas was very close to the 4% decrease that Pew found nationally.  But the Pew data does not examine the way the increase in income inequality affects city residents compared to residents of suburban areas around them.  This is a significant issue because cities in New York state have become increasingly separated economically from their suburbs.

(Data for cities with populations of less than 100,000 were not available for years before 1999).

The same dynamic played out with respect to household incomes in cities and their suburbs.  Between 1999 and 2014, the median inflation adjusted household income for residents of 14 New York cities declined, while those of households outside those cities in the counties within which they were located increased in all but two cases. Moreover, those cities with poorer populations saw greater income losses on average, while those suburbs with higher incomes saw larger income gains.

In contrast, suburban areas saw gains, on average, with suburban areas around wealthier cities seeing increases of 6.3% on average, while those around poorer cities saw increases of 4.5% on average.  Household income in suburbs outside Elmira increased by 13%, compared to the 23% decline in the city.  In suburbs around Syracuse, adjusted household income increased by 10%, while in the city, it decreased by 9%.

Both cities and suburbs had smaller percentages of middle income residents in 2014 than in 1999, but started from different positions.  In cities in 1999, on average only 43% of residents were middle class, compared with 55% in suburban areas.  In 2014, 38% of city residents on average were middle class compared with 50% in suburbs.  So, both cities and suburbs lost the same percentage of middle income residents.

The decline of middle income households is a significant concern, but, even more significant are the overall growth of inequality, and the overall decline in real household income that has taken place this century. 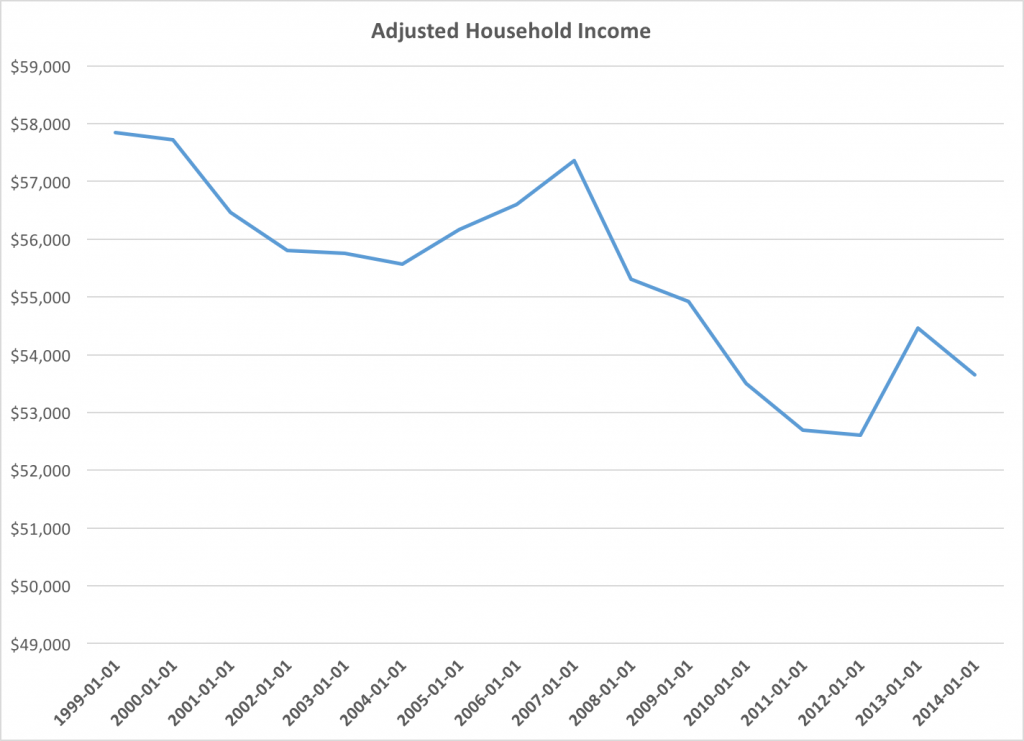 But the impact of income stagnation has been unequal.  The chart and table below show that the impact of recent income declines has been greatest on lower income groups.

Because of the concentration of low income residents in cities, city households saw significant declines in inflation adjusted income over the past fifteen years – averaging a decrease of 12%, compared with an increase of 6% in suburban areas.  As a result, the average difference in household incomes between cities and suburbs increased from 46% in 1999 to 74% in 2014.

Our society has become increasingly divided economically over the past 35 years.  More recently, the U. S. economy has not provided income growth for the country’s residents.  In New York State, the impact of these changes has been significantly different for suburban residents, who have been largely insulated from these economic problems, and for city residents who have suffered from them.