In a post examining the causes of the decline in manufacturing employment over the past fifty years, I concluded, like other analysts, that although increases in imported manufactured products had caused part of the decrease, most of the drop resulted from productivity increases from automation and process improvements.  See for example: https://www.nytimes.com/2016/12/21/upshot/the-long-term-jobs-killer-is-not-china-its-automation.html.

Because of the emphasis on the idea that manufacturing has seen sharp productivity gains, much of the discussion about the future of manufacturing employment has focused on the perceived threat of automation. For example, a recent OECD study, “Automation, Skills Use and Training,” by Ljubica Nedelkoska,  and Glenda Quintini estimates that “Across the 32 countries, close to one in two jobs are likely to be significantly affected by automation, based on the tasks they involve. But the degree of risk varies. About 14% of jobs in OECD countries participating in PIAAC are highly
automatable (i.e., probability of automation of over 70%).”  But, the impact of automation appears to be slowing.  Manufacturing productivity growth has stagnated since the recession of 2008-10. 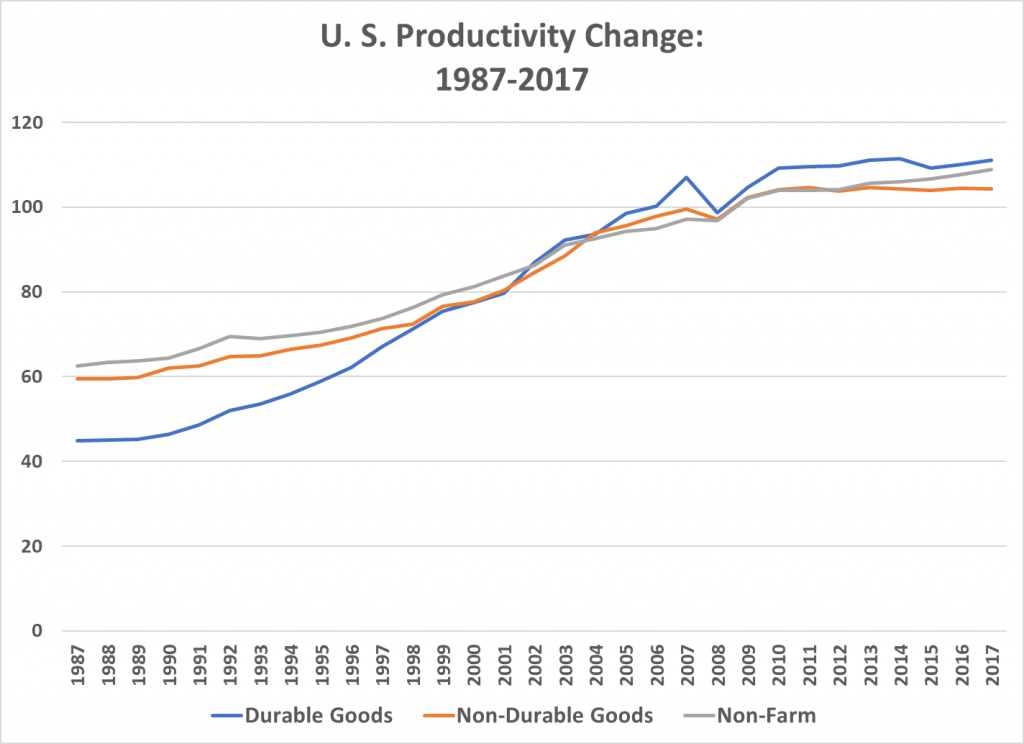 More recent research has challenged the focus on productivity increases as the primary cause of manufacturing employment declines.  Daron Acemoglu, David Autor, David Dorn, and Gordon H. Hanson concluded in “Import Competition and the Great U.S. Employment Sag of the 2000s,” that between two and two million, four hundred thousand jobs were lost to Chinese competition between 2000 and 2011. They point out that “the coefficient estimates imply that had import competition from China not increased after 1999, trade-exposed industries in local labor markets would have avoided the loss of 2.35 million jobs.”

A new study, “Understanding the Decline of U. S. Manufacturing Employment,” by Susan N Houseman of the Upjohn Institute for Employment Research shows that a statistical artifact drove much of the apparent productivity growth.  She found that “Since the 1980s, however, the apparently robust growth in manufacturing
real output and productivity have been driven by a relatively small industry—computer and electronic products, whose extraordinary performance reflects the way statistical agencies account for rapid product improvements in the industry. Without the computer industry, there is no prima facie evidence that productivity caused manufacturing’s relative and absolute employment decline.”

Houseman notes that in accounting for the output of computer products, the government recognizes that “The semiconductors embedded in our electronics are much more powerful today than they were a decade or even a year ago. Likewise, the computers and related devices that consumers and businesses buy today have much greater functionality than in the past….The rapid output growth in this industry does not necessarily imply that American factories are producing many more computers, semiconductors, and related products—they may be producing less. Instead, it
reflects the fact that the quality of the products produced is better than in the past. The statistical agencies adjust price deflators for other products, such as autos, for changes in quality. However, the effects of quality adjustment in other industries on aggregate statistics, to date, have generally been small compared to those of the computer industry.” (p. 11)

On the surface, measuring worker productivity would seem to be simple since the definition of productivity is output per work hour, and the Department of Commerce’s Bureau of Economic Analysis provides information about employment and industry output.

Many of the analyses of the decline of manufacturing employment, including mine, looked at the inflation adjusted value of manufactured products over time and compared that with the number of workers employed in manufacturing them.  When they discovered that the value of output per worker had increased, they attributed the change to increases in productivity.

Instead, Houseman shows that the output of products per worker in manufacturing, except for the computer industry,  has grown at about the same rate as the overall economy.   The growth of the value of manufacturing output as measured by the Bureau of Economic Analysis is associated with product quality improvements, not increases in the volume of products manufactured.  The chart below, which illustrate’s Houseman’s point, is from “Trade vs. Productivity: What Caused U. S. Manufacturing’s Decline and How to Revive It,” by Adams Nagar, Information Technology and Innovation Foundation, February, 2017.

As a result, Houseman concludes, “once the anomalous effects of computer industry are excluded, even descriptive statistics provide no prima facie evidence that higher rates of automation were primarily responsible for the long-term decline in manufacturing’s share of employment. Rather, they suggest that understanding the reasons for the slow output growth in manufacturing output—whether from weak growth in domestic demand, strong growth in imports, or weak growth in exports—is critical.”(p. 19) 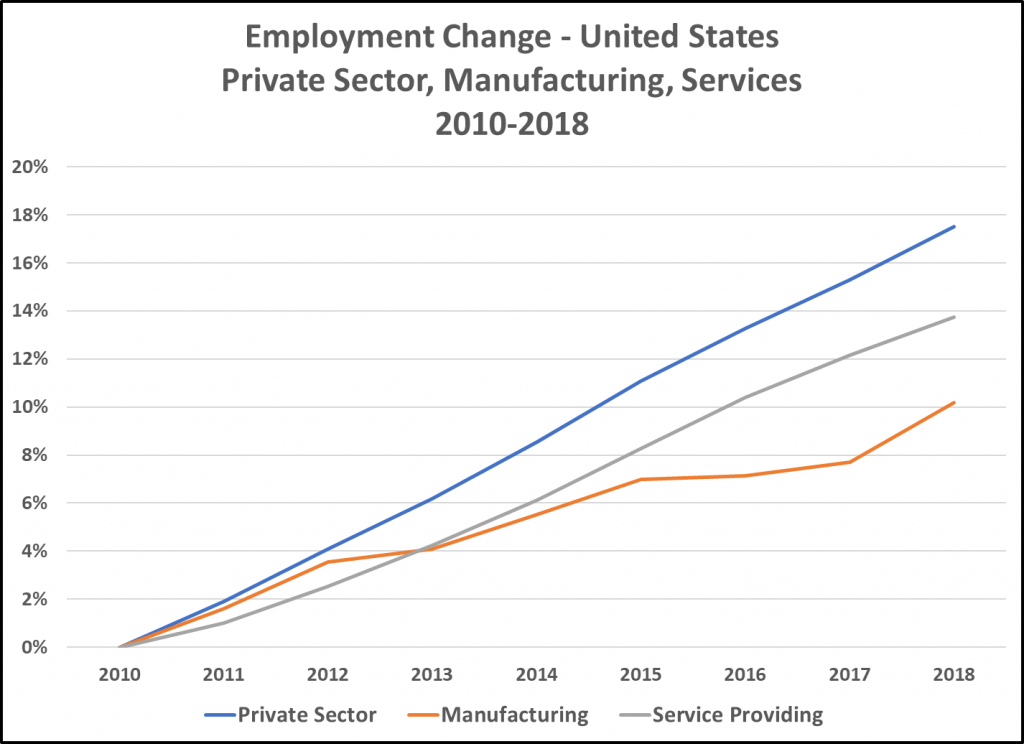 To date, the Trump administration has focused on business tax reductions and tariff policy to encourage employment growth.  The stimulative effects of the tax policy changes are likely to support continuation of the post recession recovery, but will confront monetary policy restraint from the Federal Reserve as inflationary pressures build.

A discussion of the administration’s tariff approach is beyond the scope of this research, but it carries significant risks associated with the possible growth of trade wars, as well as trade-offs from higher prices for imported goods.

The loss of manufacturing employment has damaged to the economy, particularly for workers with low educational attainment and few job skills, since jobs with few educational and skill requirements in the service sector generally pay less.  Since it is clear that imports have played a major role in the decline of manufacturing in the United States, policies that help manufacturers are appropriate responses at the federal, state and local levels.

Among the more significant options available at the state and local level are support for skills training, manufacturing process improvement assistance from programs like the Manufacturing Extension Program, programs to encourage technology transfer and commercialization, and those to encourage entrepreneurship.  Additionally, streamlined regulatory and permit processes can help manufacturers seeking to locate or expand.

But, it should also be understood that manufacturing employment is a small percentage of total employment, and that government policy responses will not fully erase the significant wage differentials that have led manufacturers to produce their products outside the United States.  For that reason, rational economic development policies should also focus on encouraging the growth of service sector industries.