A reader of this blog recently wrote, “We know that labor force participation rates across the country have declined noticeably for a number of years, and many economists have warned of the troubling implications of this.  Such rates across Upstate NY have declined as well, and in most cases are significantly below the national average – not an encouraging sign.  In the North Country and the Mohawk Valley, they are not much above 50%, and in some other Upstate regions just a couple of percentage points higher. Clearly some of this indeed is because people have not been able to find jobs, and thus have left the labor force.  I don’t think a low unemployment rate necessarily indicates that “Upstate’s problem is not that its residents cannot find jobs.”

A recent Brookings Institution study, “What we Know and Don’t Know about Declining Labor Force Participation: A Review” points out that: “This steady decline in prime-age male participation rates and recent stagnation of prime-age female rates has adverse implications for national economic growth and individual well-being. Workers between the ages of 25 and 54 tend to be at their most productive, so these trends affect economic growth as well as individual income. Further, as discussed below, lower work rates might be contributing to the decline in marriage and to poorer health and psychological well-being, possibly leading to an increase in premature deaths among certain populations.” 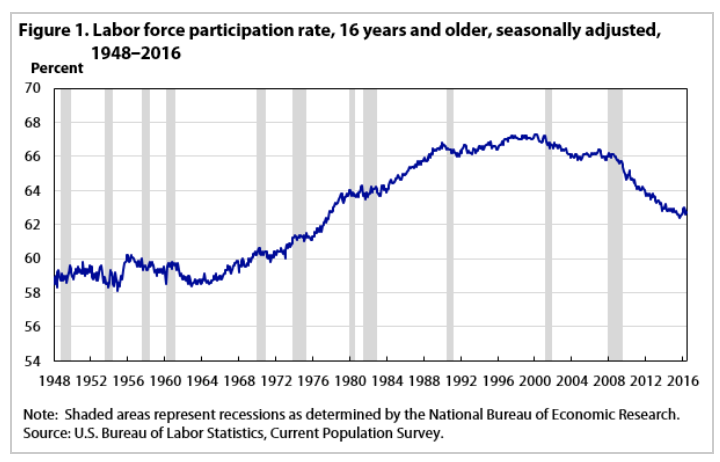 A significant part of the decline is explained by the aging of the population, as older workers move into retirement. John Robertson and Ellyn Terry of the Atlanta Federal Reserve Bank report that “In 2007, about one in five Americans were over 60 years old. In 2015, almost one in four were over 60. Moreover, this demographic force will continue to suppress the overall LFPR as the share of older Americans increases further in coming years.”

The causes of the decrease in labor force participation for prime age people include both the demand for workers and the supply of labor.  On the demand side, technology and trade have reduced the demand for low skilled manufacturing workers.  The disparity in demand for workers at low and high skill levels has increased, because technology has led to greater demand for workers with technical and managerial skills.  On the supply side, the Brookings Institution study points out that “the problems include not only a lack of skills but high reservation wages [the wage levels at which people are willing to accept jobs], poor health, and the availability of disability insurance or other forms of unearned income.”

In this post, I look at differences in the labor force participation level between counties in New York State.  Because the economic performance of the New York City Metropolitan area has been stronger than upstate New York since 2000, participation in the two regions is examined separately, where relevant.

In this post, I use two different data samples.   Beginning in 2005, county level labor force participation data is available from the Census Bureau’s American Community Survey.  The sample used for the section titled “Change over Time” is from single year samples of one percent of the United States population.  The single year samples are too small to permit an analysis of data for small population units.  Consequently, only 37 of 62 counties in New York State are included.  Because the sample is relatively small, estimates of smaller county characteristics can have relatively large errors – as much as 2.5% for labor force participation for the entire population, and as much as 5% for some groups within the overall population.

In the section “Comparison of Labor Force Participation at the County Level in 2015” I use a five-year sample of the population that includes 5% of the United States population.  Because the sample is larger, it includes all New York counties, and has less sampling error.  Smaller county estimates are likely to be within 1.3% of the true value.  Estimates of groups within the overall population should be within 3% of the true value.  But, because the data is an average of five-year data, it lags trends, since the midpoint for the time period covered for the 2015 five-year data, which includes surveys from 2011 to 2015, is 2013.

Because differences in labor force participation between counties are relatively small, it is important to recognize that their relative performance can vary from year to year because of sampling error.  For example, Schenectady County’s labor participation rate was reported as 63.7% in 2014, 61.7% in 2015, and 64.7% in 2016.  That kind of variation could reflect sample variation around the true participation level. 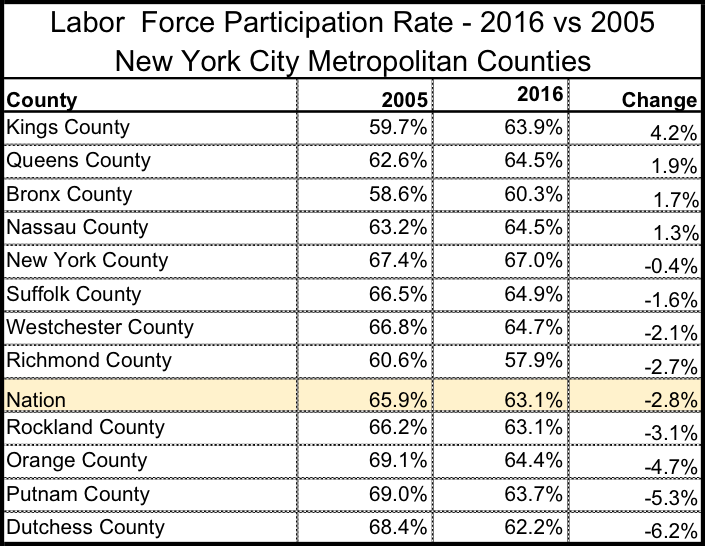 The tables showing change over time between 2005 and 1026 are based on the American Community Survey data for a single year.  Counties in the New York Metropolitan areas saw relatively wide variations in the change in the level of labor force participation between 2005 and 2016.  For example, Kings County (Bronx) saw an increase from 59.7% to 63.9% over the period, while Dutchess County saw a decrease of 6.2% from 68.4% to 62.2%.  Two thirds of the counties in the metropolitan area did better than the national average, based on the American Community Survey sample data.
Three quarters – nine of twelve counties in the New York metropolitan area had participation rates that were higher than the national average in 2016, compared with seven of twelve in 2005. 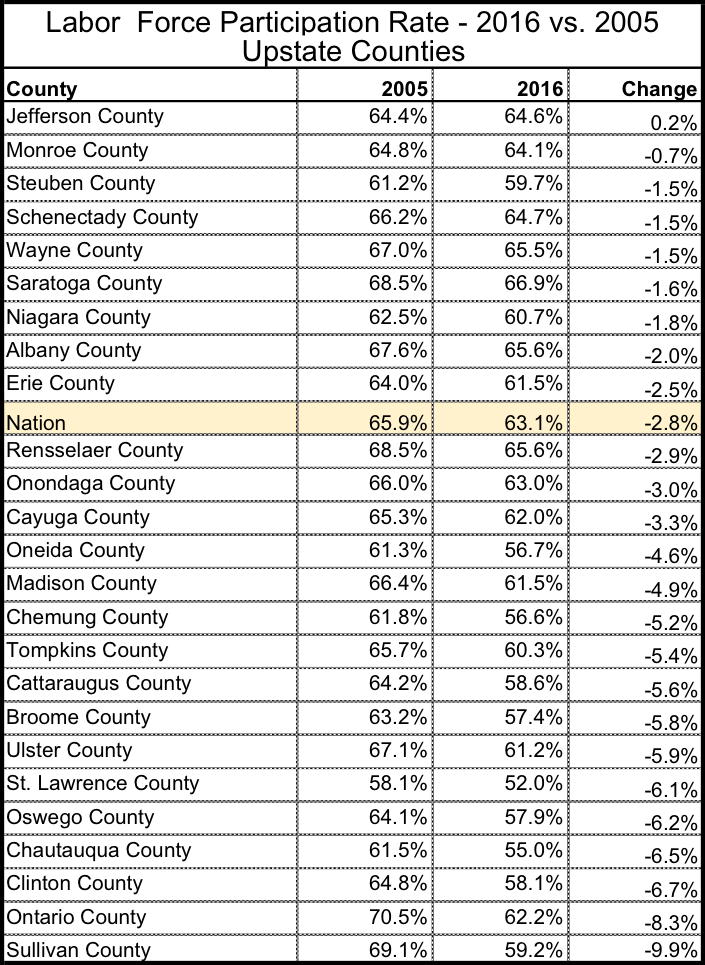 In upstate New York, larger metropolitan counties, like Monroe, Schenectady, Saratoga, Albany, Niagara and Erie County had smaller percentage labor force participation losses between 2005 and 2016 than did the nation .  Others, like Rensselaer County, Onondaga County and Cayuga County were near enough to the national average to be within the margin of error of the national estimate.

Comparison of Labor Force Participation at the County Level 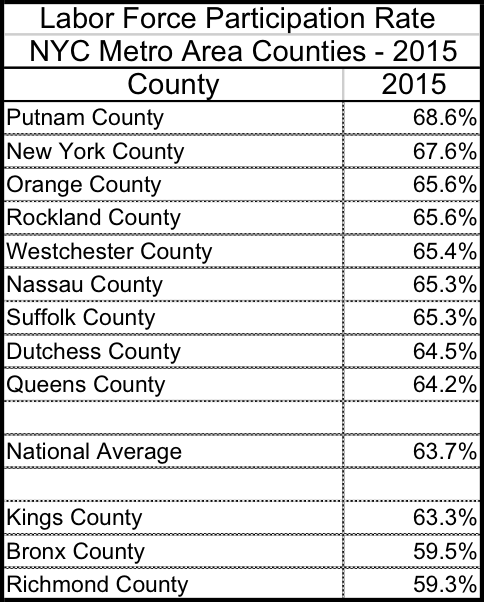 The American Community Survey five-year sample from 2011 to 2o15 used in the following section has a margin of error of approximately plus or minus 1.3% for counties, so differences of that size between counties should not be viewed as significant.  Because this data has a different time period (2011 to 2015) and sample size, the numbers differ from the discussion of change above.

Upstate, larger metropolitan counties, including counties around Albany-Schenectady-Troy, Rochester, Syracuse, and Buffalo-Niagara Falls, had labor participation rates that were higher than or within their margin of error compared with the national average.  Smaller urban areas upstate, like Utica-Rome (59.4%), Binghamton (58.7%), Jamestown (58.1%) and Elmira-Corning (56.9%) and rural counties generally had participation rates that were below the national average

Census data includes a number of factors that show significant relationships with levels of labor force participation.  Among the more important are:

At the individual level, education is a significant predictor of labor force participation.  People with a bachelor’s degree or higher are  27% more likely to be employed or seeking employment than those with have not graduated from high school. 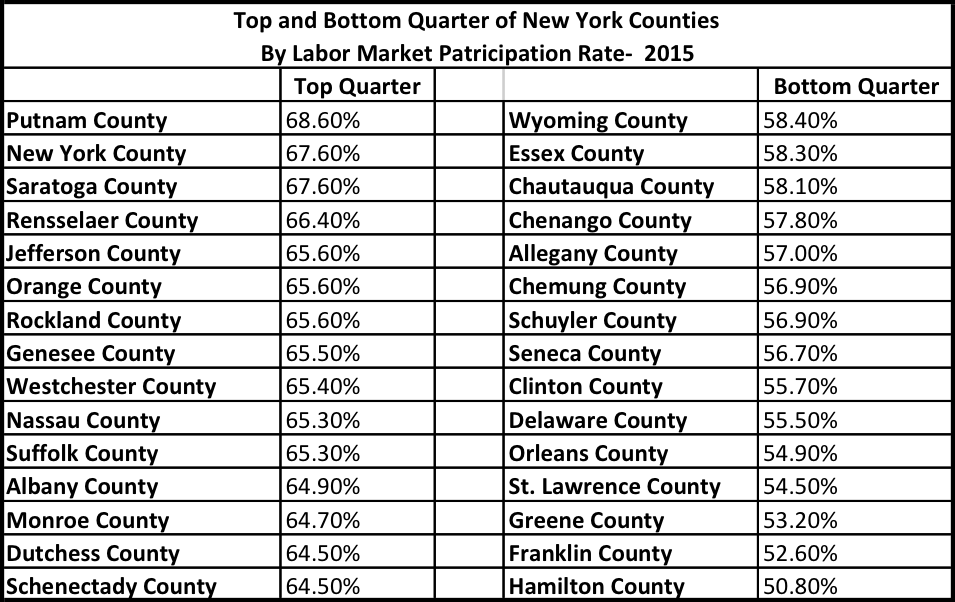 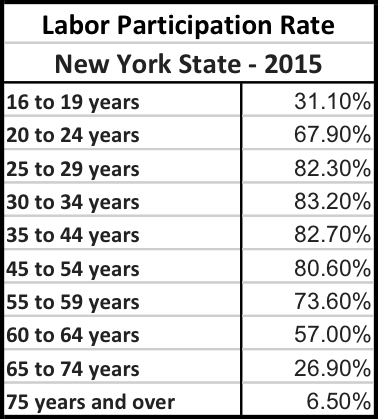 Like education, age is related to labor market participation at the individual level.  Young (16-19 years old)and old (60+) people participate at lower rates than workers of other ages.  As a result, it is not surprising that counties whose populations have higher percentages of older people have lower labor participation rates than counties with younger populations.

This section compares labor market participation levels for two age groups:  younger workers aged 25-44 are in age groups that show the highest levels of labor market participation overall, and older people, aged 55+ who are beginning to leave the labor market.  The differences in the size of the older compared to the younger age group in the top 15 and bottom 15 counties are relatively small – in the top 15 counties, people between 25 and 44 make up 5% more of the total population than in the bottom 15 counties.  Older people, aged 55 or more, are 4% more of the total population in the lowest 15 counties than in the highest 15 counties.

For this analysis, the state has been separated into the New York City Metropolitan area and the rest of the state, because of significant differences in the levels of black/Afro-American and hispanic labor participation.  Because the number of black and Hispanic residents of low participation counties New York City Metropolitan Area is quite small, the comparisons presented here are between the top half of counties by labor market participation and the bottom half. 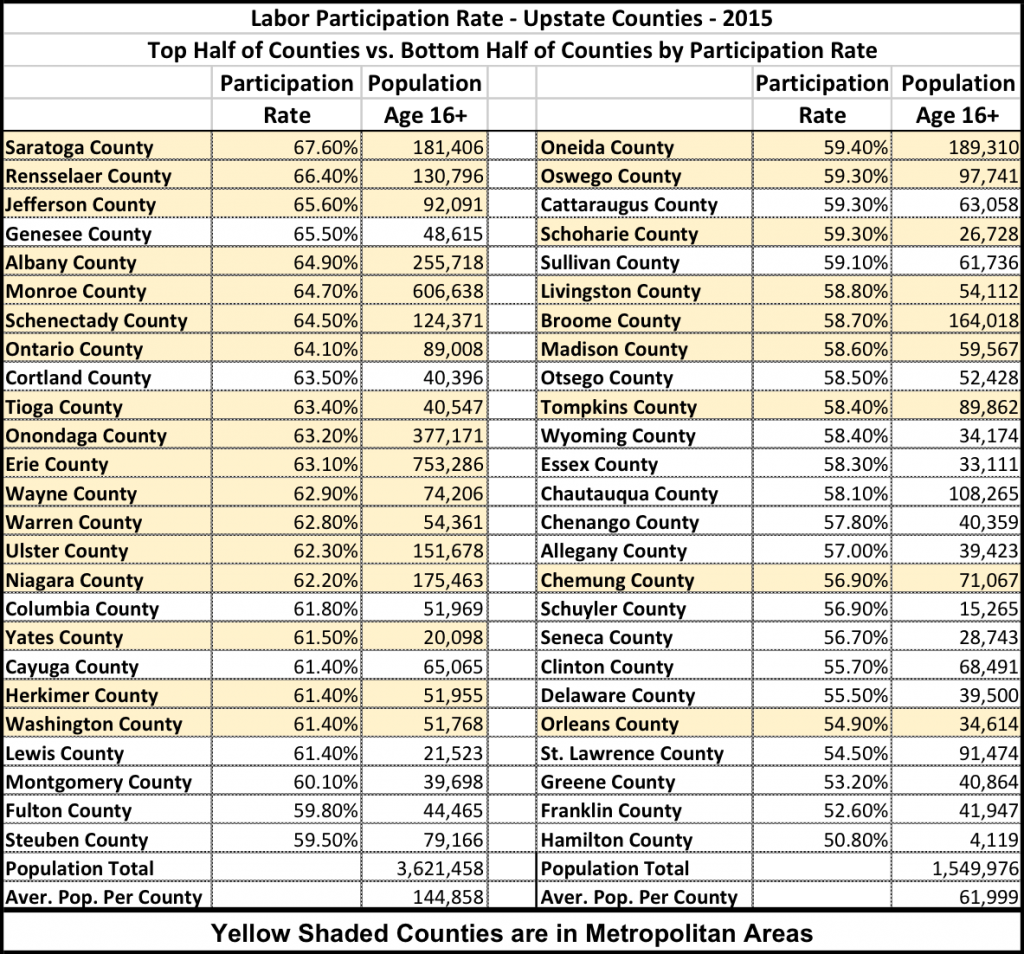 The range for upstate counties was much larger.  Saratoga County’s participation rate of 67.6% was the second highest in the state, while Hamilton County’s was 50.8%, almost 9% lower than the lowest county in the New York Metropolitan area.  In Upstate New York, labor force participation is higher in large metropolitan areas than in small ones.  This finding suggests that areas with smaller populations do not provide the opportunities for employment that are offered by larger ones.

A portion of the variation in the educational attainment of residents between counties is likely to be a result of the differing levels of educational levels of educational attainment of young adults who were raised in those counties.  Another part stems from migration patterns of young people seeking and finding first jobs inside and outside their home counties.  Determining the relative contribution of each factor is beyond the scope of this research.

It was expected from previous research that counties having a higher proportion of older residents would have lower participation levels than those with younger residents.  But, the differences found in counties in New York State were less significant than those for educational attainment.  The percentage of residents aged 25-44 was about 5% higher in high participation counties than in low counties, while the percentage of those 55 years old or older was 4% less.

There were also significant variations in labor market participation within groups in high and low participation counties.  Among the more notable were:

Differences in participation within groups between counties that have low and high labor participation levels at least partially reflect the hypothesis that people have been unable to find jobs and have left the labor force.  But beyond that, the data shows that some groups are much more likely than others to be absent from the labor force in low participation counties.  These include people with little education, men, young and old workers, and blacks and Hispanics.   The low levels of participation of these groups in low participation counties probably reflect reinforcing factors, like lower average levels of education among minority group members, the decline of manufacturing industries that employed low skilled men, and low levels of demand for workers without college educations in places where there are relatively few jobs available.

These differences are not present in the New York City metropolitan area, where most counties have relatively high labor market participation levels, or in larger upstate metropolitan areas, like Buffalo, Rochester, Syracuse and Albany, but they are significant is smaller urban areas like Utica, Binghamton and Elmira, and in rural areas of New York State.

To the extent that New York’s development policies can be based on need, one focus should be on upstate’s small urban areas and rural communities.  If smaller counties are to see more labor market participation by their residents, the state must help them address the barriers that have discouraged participation by less educated people, men, blacks/Afro-Americans and Latinos, and find ways to generate jobs that retain college graduates.  At the same time, policy makers concerned about the well-being of New York residents must recognize that some policies that would help residents of low participation counties access jobs could increase out-migration to locations with more employment opportunities.  The ability of low participation counties in small metropolitan areas and rural locations to create the resources needed to diversify their economies to include occupations that match the qualifications of residents are likely to be limited, because of the significant advantages offered by locations that have larger labor pools.