As I write in late July, Covid-19 cases continue to reach new highs at the national level.  The number of new cases reached more than 66,000 a day in the week ending July 18th, using a seven day rolling average.  That number is about two and one half times the 24,000 new cases that were identified a month ago.  As has been widely reported, the breakout has taken place in the South and West, in places like Florida, Texas, Arizona and California. (Chart data from the New York Times Covid-19 database). 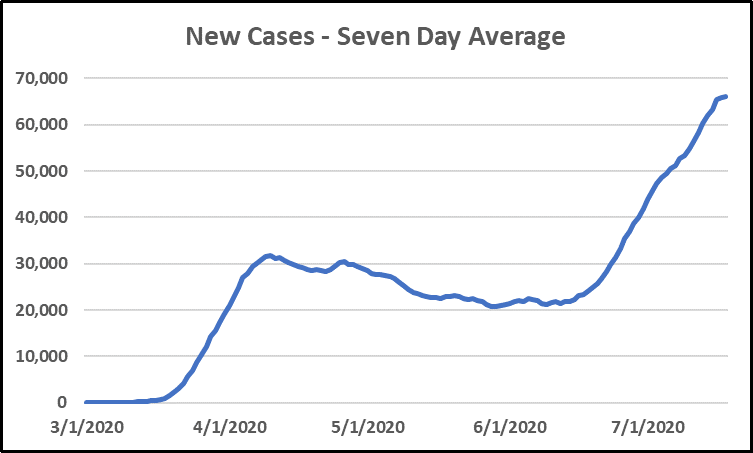 Growth in Infections in Florida, Texas, Arizona and California 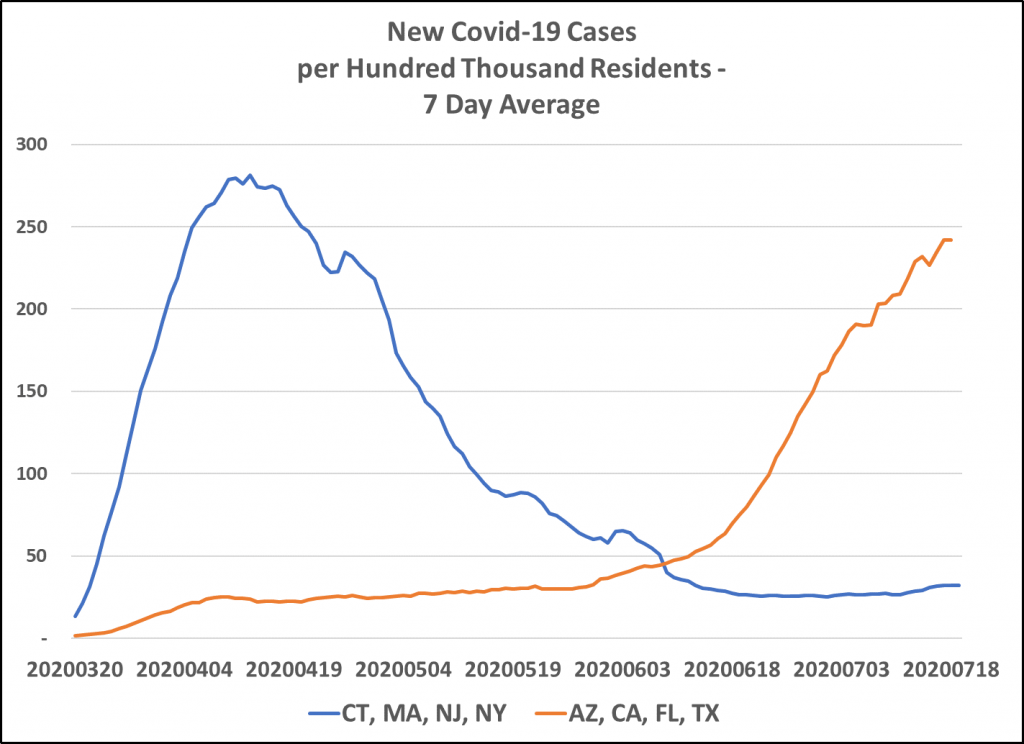 The growth in infections in these states stands in marked contrast to the relative stability in Covid-19 in northeastern States, like New York, New Jersey, Massachusetts and Connecticut.  The data shows that while the number of cases relative to population in the recent southern and western surge is still lower than in the northeast at its peak, cases are growing rapidly. (Source:  The Covid Tracking Project) 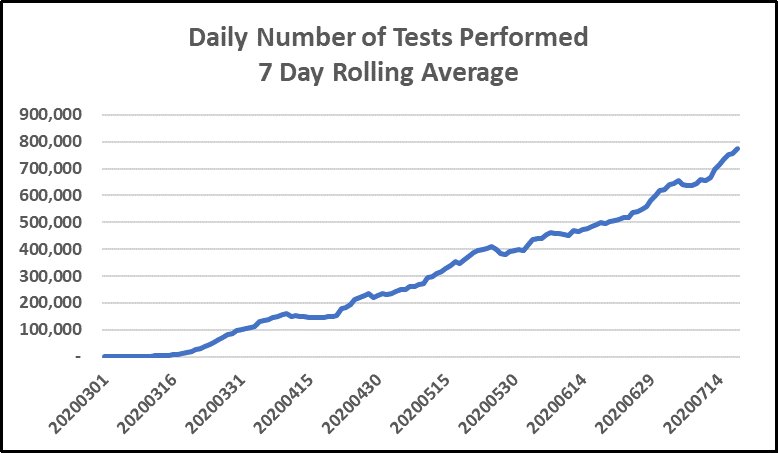 In part, the recent growth in cases is fueled by the increasing number of tests that are being performed.  While President Trump’s suggestion that more testing causes more cases of Covid-19 is not true, it does result in a higher percentage of infections being identified.  In recent weeks, more than 750,000 tests have been performed, compared with about 300,000 when infections peaked in the Northeast  (Covid Tracking Project). As a result, more Covid-19 cases with less severe symptoms are being identified than in March and April. 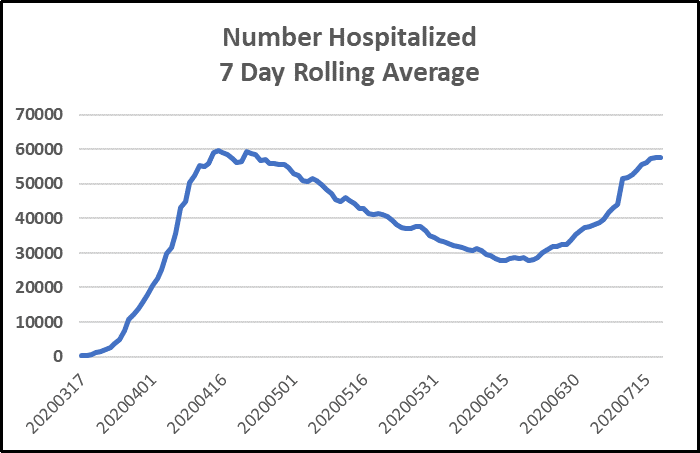 Because of the growth in testing, a better indicator of the intensity of infection is the number of current hospitalizations.  The hospitalization data shows that the current surge is about as severe as that in April, when the northeast was the primary infection location.  While the current surge is large, it is only about half of what would be expected based on case growth, even accounting for the typical lag as much as seven to 14 days between infection and hospital admission.  One other factor that could account for the smaller hospitalization surge could be a higher reported recent incidence of Covid-19 in younger people.

But, even discounting a portion of the growth in cases because of greater detection, we are no better off as a nation than we were before lock-downs were imposed this Spring.  Much of the nation suffered a severe economic contraction with no apparent long term benefit.

The Effects of Social Controls

In Europe and in northeastern states, like New York, New Jersey, Connecticut and Massachusetts, the initial rate of infection was dramatically reduced by tight controls on interpersonal contacts, by closing down all non-essential workplaces, limiting gatherings to very small groups, by expanding testing and tracing and through educational campaigns emphasizing the importance of social distancing, hand washing and the like.  Later, the states began slow, phased business re-openings.  But the reopening process did not lead to the restoration of all forms of personal contact.  In New York State, there are still limitations on restaurants and bars, and activities that involve large gatherings are still prohibited.

In much of the rest of the nation what appeared to be a somewhat similar process took place, with phased business re-openings and messaging to the public about the need for continued social distancing.  But there were differences between what took place in northeastern states like New York and other states.  The media has characterized the reopening process as having been initiated too soon and implemented too quickly.  Given the fact that the number of daily cases is now substantially higher than it was in March and April when the nation paused business activities in order to get the pandemic under control, what went wrong? 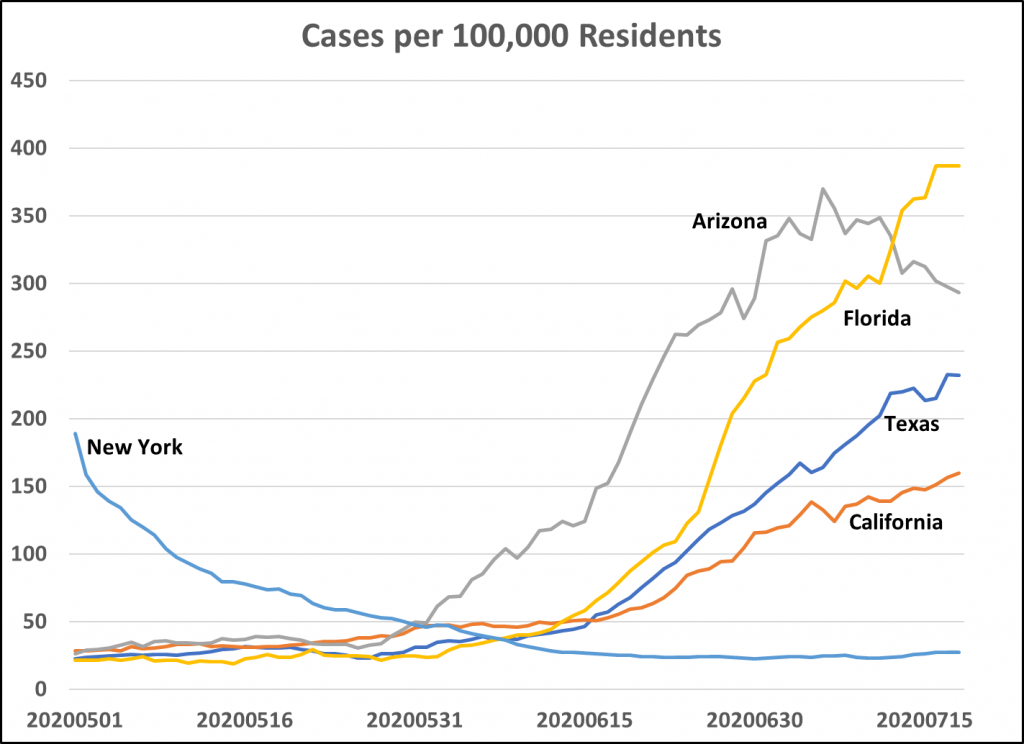 One narrative argues that states opened too early – before the growth of Covid-19 cases was under control.  But, in the cases of Arizona, California, Florida, and Texas, infection rates in May, prior to broad business re-openings were relatively low – in fact, they were similar to the level that New York has attained.  Governor Cuomo often argues that New York was unlike many other states in “bending the curve,” but his argument leaves out an important fact – states that now have high levels of infection entered the reopening phase at levels of infection that were similar to New York’s current level. 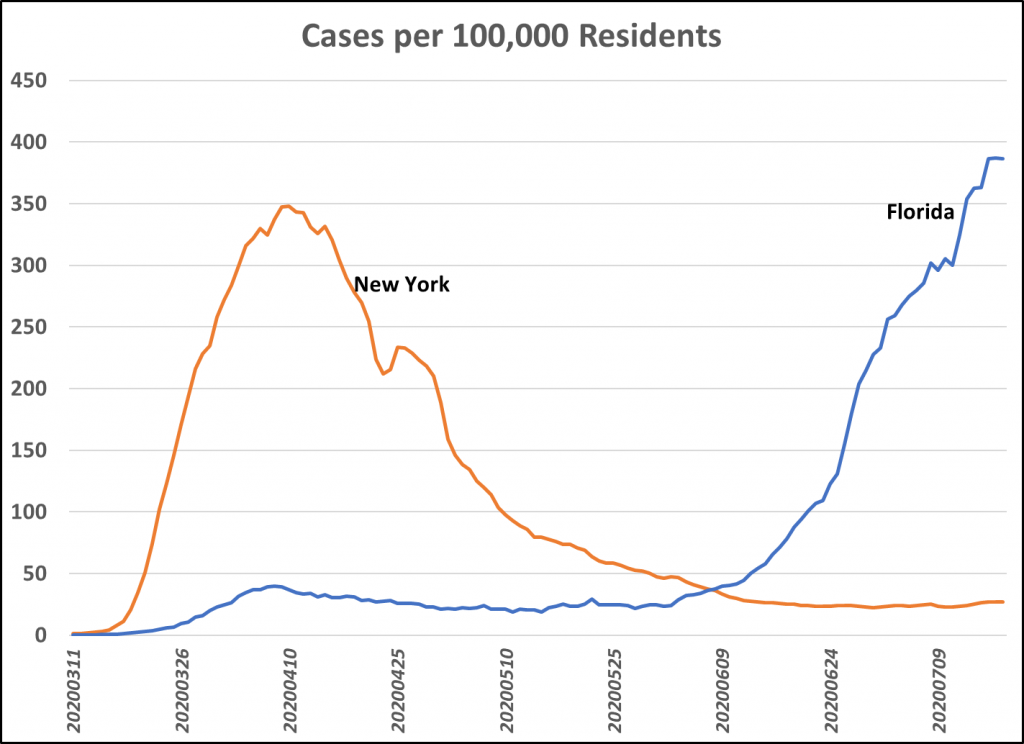 Florida is an example.  The state never experienced a steep decline in cases, because it did not have a significant case surge in March and April.  Infection levels peaked at less than 50 cases per week per 100,000 residents in April compared with 350 in New York State.  Cases in Florida showed a slight decline through mid-May, and remained stable until about Memorial Day.  Infection levels in Florida in May were similar to those in New York beginning in June.  Under the circumstances, beginning the reopening process in Florida was no less reasonable than in New York State.

Because the only effective Covid-19 preventative is to avoid contact with droplets or aerosols containing the virus, the fundamental strategy has been to limit close physical interactions outside small groups.  Facial masks provide a second layer of prevention by limiting the spread of virus.  When the Federal government recommended significant limits on personal contact in March and April, one reason why infections declined is that Governors in the most heavily affected states – New York, New Jersey and Massachusetts supported the recommended protections, strongly communicating the need for limits on personal interaction and implementing effective controls at the state level.

After the initial Federal effort to limit direct personal contact for thirty days ended, inconsistent messaging from the Federal government became an increasing problem.  President Trump’s statements encouraging a quick reopening created doubts about the guidance provided by health professionals.  His decision not to wear a mask and lead by example suggested that personal protection was unimportant.  Instead of a consistent message emphasizing the need for personal precautions and strong guidance to state governments, the Federal Administration’s approach gave inconsistent personal safety recommendations and pushed responsibility for managing the pandemic to the state level creating a patchwork of differing rules and recommendations.

Without strong and consistent messages from the President and  leaders at the state and local levels emphasizing the importance of individual actions to limit exposure, the pernicious spread of disinformation on social media assumes greater significance.  People who dislike taking precautions like wearing masks become can susceptible to so called “experts” like the chiropractor who claimed to “expose Covid-19 mask requirement as flawed and dangerous.”

With weak leadership at the Federal level, states like Florida, Georgia and Texas, managed their re-openings differently from New York, instituting more permissive strategies.  Some states allowed gymnasiums, restaurants, bars and entertainment facilities to reopen early in the recovery process, though at reduced capacity.  Governors in Florida and other places, reluctant to take potentially controversial actions, did not mandate the wearing of face masks in public.

Once infection rates began to increase, several of the states facing the current wave did not move effectively to manage community spread by mandating masks and reversing  business re-openings.  City governments in areas with relatively high levels of spread instituted tighter controls in some cases, but the more relaxed state stance communicated a lower level of urgency than more forceful state leadership would have shown.  In some cases Governors with weak state levels controls preempted stronger local control measures.

At the outset, it must be acknowledged that in every crisis management situation, mistakes are made and questions are raised about decisions made by governmental leaders.  People often have unreasonable hopes for easy solutions to difficult problems and fail to recognize that decisions must be made in uncertain circumstances within political, organizational and financial constraints that can result in disappointing outcomes.

The Covid-19 pandemic is a particularly difficult example of a crisis situation, both because its novelty forced decisions in very uncertain environments and because initially little was known about the extent of transmission of the disease or its means of spread.  It’s not surprising that places where the disease struck initially saw rapid increases in cases and deaths – to the point that medical care facilities in the New York metropolitan area and in Italy and Spain were overwhelmed and thousands of people died.  There is no doubt that under the best circumstances, there would have been difficulties in providing needed supplies like personal protective gear and testing materials to locations where they were needed.

The failures in managing the spread of Covid-19 in the United States go beyond the normal issues associated with crisis management.  Inconsistent and contradictory communications from President Trump that minimized the threat of Covid-19  encouraged people not to use masks and take other steps to protect themselves from infection.  Lack of forceful guidance to state leaders has discouraged some state governors from acting because of the fear of blow back from constituents who  disliked wearing masks and from businesses that disliked limits.  Delays in organizing supply chains to meet needs for protective equipment and testing have been problems, with continued excessive delays in test results.

Under the best circumstances, managing the spread of Covid-19 infections would be a daunting challenge.  Although states in the northeast have reduced the spread of infections to a relatively low level they face the constant threat of surges if people increasingly disregard recommendations for social distancing and mask wearing.  The news media continue to carry reports of block parties in cities like New York City and Albany, in some cases resulting in multiple cases of Covid, and of people who refuse to wear masks in public places.

As a 70+ year old who limits his exposure to necessary shopping and medical appointments, I continue to see examples of non-compliance.  A few people continue to enter stores without masks.  More often people wear them improperly, below their noses or below their chins.  At one cafe near my house, a waitress was seen serving outdoor tables with her mask below her chin.

In any society a few people will fail to obey the rules.  So long as non-compliance is limited, the threat they pose to others is relatively small.  But if more people tire of the limits and to take more risks infections will surge, and hospitalizations and deaths will follow.