In earlier posts, I wrote about income and racial separation between the residents of upstate cities and suburbs.  The data showed that residents of upstate cities saw sharp increases in poverty levels between 2000 and 2013, while city populations became increasingly diverse, primarily because of the loss of white residents.  The data also showed that minority group members living in cities had median incomes that were less than half of those of white residents living in suburban areas.

Income and racial residential patterns can be viewed through a different lens – one which focusses on the differences between residents of neighborhoods, not cities and suburbs.  While my earlier study examined differences between residents of seven upstate cities (Albany, Buffalo, Rochester, Schenectady, Syracuse, Troy and Utica, and their suburbs, this study reviews the differences in economic characteristics of residents living in approximately 800 neighborhoods within the counties where the upstate cities are located.  The data comes from the United States Census Bureau which divides the nation into census tracts, the most detailed level publically tabulated. Overall, there are 73,000 census tracts nationally, averaging 4,200 residents each.

The data shows that while there are significant differences in concentrations of incomes, unemployment and poverty among upstate urban neighborhoods, but that income differences are not strong enough to characterize most of these neighborhoods as truly segregated by income.

This section looks at low income households in neighborhoods (census tracts) that had median neighborhood incomes that were less than 67% of the national household median ($53,000 in 2014).  The average household income in these neighborhoods was  $34,398 – less than twice the poverty level for a family of three.

Residents of neighborhoods with high concentrations of low income residents had much greater chances (17%) in 2014 of being unemployed than the average (5.5%) for all members of the workforce in upstate metropolitan census tracts.

Finally, the likelihood that residents of neighborhoods with high concentrations with low incomes lived in poverty (37%) was much higher than it was for all upstate metropolitan residents (14%). 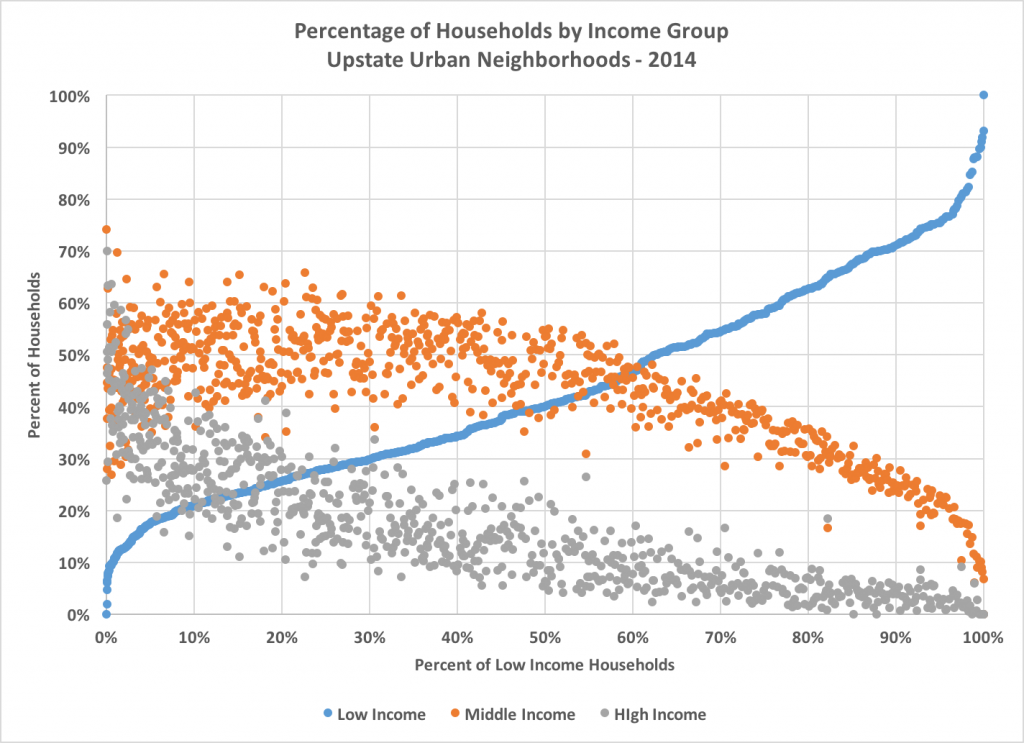 Unemployment and poverty in neighborhoods with high concentrations of high income residents were very low – about 5% of the people in the labor force were unemployed in 2014, while 2.4% lived in poverty. 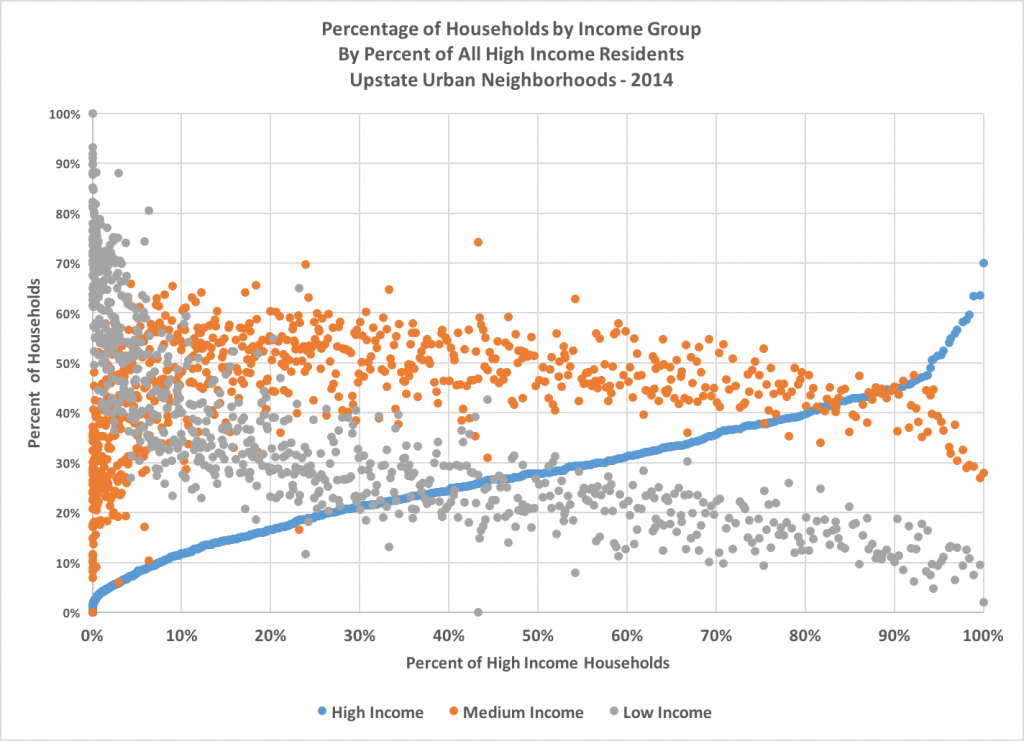 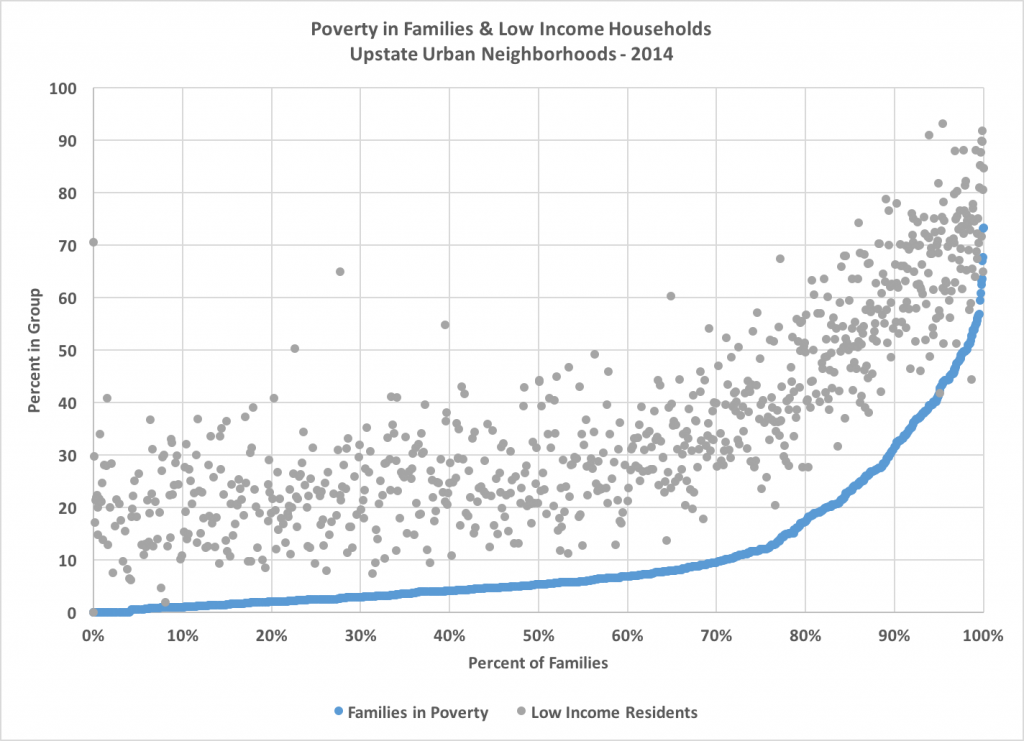 Chart 3 shows a strong relationship between the percentage of families in poverty and the percent of low income households.

A 2012 study by the Paul Taylor and Richard Fry of the Pew Research Center, “The Rise of Residential Segregation by Income”[1] examined changes in patterns of residence by income  in 942 metropolitan and micropolitan areas between 1980 and 2010 at the census tract level.  The report found that over that period of time, there was a significant increase in residential income segregation, with particularly large increases in the percentage of upper income families living in upper income census tracts.

The change in the distribution of low and high income residents by census tracts median incomes can be seen in the following chart: 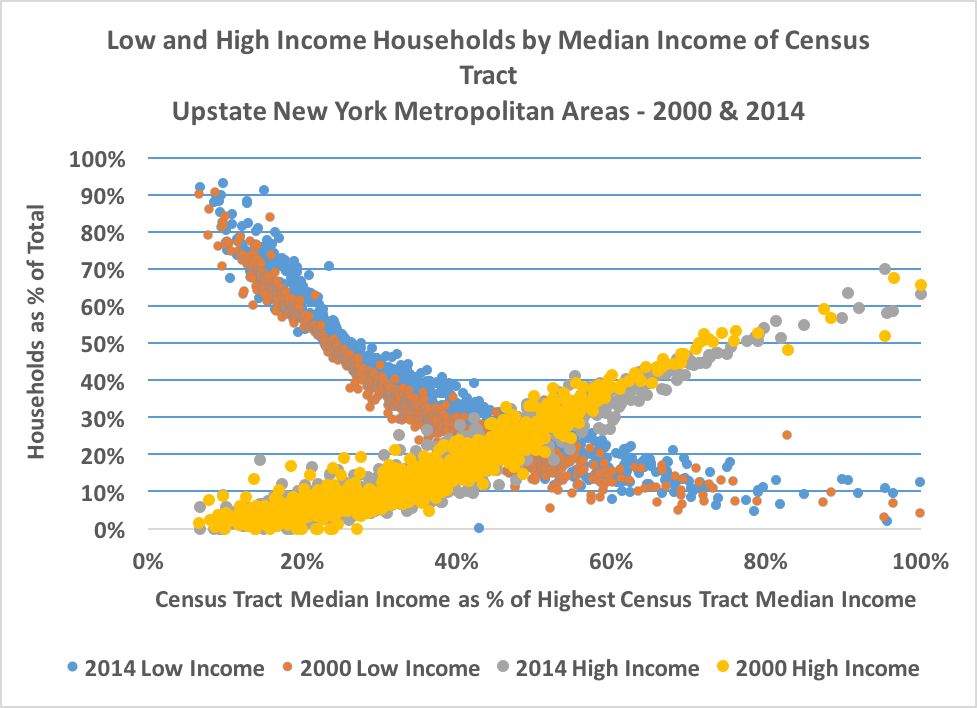 All of this points to the reality that the use of the term “segregation” by Taylor and Fry overstates the reality of the differences in living patterns between high and low income residents – both in upstate New York and in the nation.

Distribution of Households by Income Groups

In earlier posts, I pointed out disparities in poverty and income between upstate cities and their suburbs, and between white, black and Hispanic residents.  This research extends the analysis to the neighborhood level.  Because this neighborhood analysis does not treat cities as separate units from communities in the rest of counties outside cities, it finds less residential segregation than the city/outside city analysis that was the subject of my earlier posts.  In fact, because cities are not treated separately, the dire condition of some city neighborhoods gets lost in the overall picture.

Nevertheless, there are significant differences in the residential patterns of many poor neighborhoods, compared to the population as a whole.  The data shows that about 30% of them live in neighborhoods where low income households are a majority of all households.  These low income neighborhoods have high concentrations of minority residents, high levels of unemployment and poverty.

My next post will look at race in upstate urban neighborhoods, an area where there is more separation